You can stop asking us when we’re going to have kids now.

But in all seriousness – we’re pregnant! We announced Baby B over on my Instagram earlier this week and my DMs were immediately flooded with questions. I thought I’d tackle some of the big ones I got here on the blog so ya’ll can reference back whenever you so please.

How far along are you?

I am exactly 14 weeks pregnant at the time of writing this blog post.

How are you feeling?

Thanks for asking! And quite a few of you did ask over on IG.

Emotionally & spiritually, I feel incredibly excited. We were trying for a baby, so this pregnancy was planned and very much welcomed.

I will say I’ve only just started “allowing” myself to feel excited. The first trimester, especially those first several weeks, feel really unsure and tumultuous. I really did have no idea miscarriage was so common. I had to limit my time online, I did not download any pregnancy tracking apps, and really honestly tried to just pretend I wasn’t pregnant so as not to get too attached to a pregnancy that might not “stick.” This may sound a little sad or pessimistic, but it was truly how I chose to protect myself emotionally so that, if something happened, I’d be able to pick myself up and try again.

Now that we’re into the second trimester, we’ve had five or so great appointments, seen the baby on an early anatomy scan, and gotten back clean bloodwork all around – I’m finally letting myself feel that excitement.

And it feels good.

My primary symptoms include:

I did have some food aversion and nausea in my earlier weeks, but much of that has subsided.

Overall, I feel physically okay. I think as your pregnancy progresses, you sort of adjust to the new normal of how it feels to physically be you. Do I feel 100%? Absolutely not. Is it manageable for me? Totally.

When are you due?

Did you do anything to prep for pregnancy?

The main thing I did to “prep” my body for pregnancy was I started taking prenatal vitamins immediately when I stopped my birth control. Since we were operating without a goalie, so to speak, I wanted to make sure that if I did get pregnant I had all the vitamins and nutrients needed to support early growth of a fetus.

I stayed in therapy.

For me, it felt most important to take care of my mental health when prepping for pregnancy and parenting. I’m a huge advocate of therapy and have been (and will continue to be) incredibly open in discussing my own therapy journey on all my channels.

Although things in my life have felt really stable and healthy for a while now, I’ve stayed in therapy during our TTC journey and have no plans to leave therapy while pregnant and entering this new phase of life. I know we’ll be hitting a whole bunch of tiring, stressful times on the horizon. I’m really thankful to have a space to work through things and build up my “tool box” to tackle those tough times when they come.

I do regret not being in better shape.

Something I didn’t do was ramp up my exercise and movement – and I regret it. Being pregnant is WOW – physically hard! I “knew” this, but I think you don’t really know until you’re “in” it. I do regret not being in better physical shape overall, because I tend to think I’d be feeling a bit better now if I had been.

I did not stop doing anything in particular

Just because we were trying to conceive, it didn’t mean I stopped doing anything. I know a lot of people who are on the TTC journey will cut out alcohol, eat very cleanly, comb their home for “toxic” products, etc. We did none of this. We mostly just tried to follow our usual, relatively healthy routines. We’re not big over-indulgers in anything, really, so didn’t feel the need to make any large lifestyle changes right off the bat.

What was your TTC journey?

My disclaimer here is that I know fertility is a really sensitive, personal topic. I am happy to share our story, but please remember this my own personal experience. I also recognize hearing the news of someone else’s pregnancy can often be really tough to hear. If fertility has been a journey for you, I’m sending you a whole lot of love – because this journey isn’t as simple as they made it out to be on Mean Girls (“Don’t have sex, because you will get pregnant and die!”).

I went off birth control in October 2021.

I’ve been on the pill since I was about 15 years old. I had terrible acne as a teenager – I did not one, but two rounds of Accutane. Between my angsty skin and painful periods, birth control seemed like a slam dunk. I continued to be on the pill until my husband and I decided we wanted to start trying in October of 2021.

There was nothing special I did when stopping birth control, I just stopped taking the pills after a pack was up.

It took me a couple of months to feel like I understood what my body off of birth control was like. My periods have always been very regular and continued to stay incredibly regular while off the pill.

The biggest change I saw coming off of the pill was an increase in my sex drive.

I loosely tracked my cycle using an app.

I used the Flo app as well as the Apple Health app to very loosely track my cycle. I did this prior to coming off of birth control as well. These apps will give you a pretty broad range for your ovulation window, so I was always sort of aware of when I could be ovulating.

The operative word there is “could.” Apps can’t tell you exactly when you’re ovulating. We tried to make a point to schedule some date nights during those windows.

Frustration started to set in.

By late February I’ll admit – I was starting to feel a little frustrated and confused. I had so many doctors and people in my life talk about how coming off of birth control instantly resulted in pregnancy (I swear I had one doctor warn me, snapping her fingers, “BOOM! You’ll get pregnant!”).

That just wasn’t the case for us. We were trying for months and each time I got my period I’d be hit with a wave of emotions. Was I relieved? Was I sad? Was it possible to feel half and half of both? Because that was sort of how it felt.

I do remember one time my period was a little late (very abnormal for me), so I went to take a test. And literally as I was peeing on the test I got my period. I think that was the one where I started to feel a little pissed, like life just had to be laughing at me.

I picked up a pack of ovulation tests, went on vacation, & got pregnant.

I really did want to just “casually” get pregnant while only “loosely” trying. There was something about actually tracking my ovulation that sounded so un-sexy to me. But by June I was fucking over it. I went to Target two days before we were set to jet off to Ireland and bought an ovulation test kit.

I took a test that same day, which came up with a little frowny face – not ovulating (even though my apps all said I should be). I took a test again the next day – happy face! Ovulating.

And that, my friends, is how future Baby B came to be.

How did you tell your husband?

I left six positive pregnancy tests on his desk while he was out running errands and then poured myself a Spindrift and sat on the couch.

How has your partner supported you during this time?

I love my husband. And I’ve always known how much he’s loved me. I’ve never doubted he’d be a great dad or overall a great partner. But, and it’s no discredit to him, I did have doubts on just how much non-pregnant spouses can really support their pregnant partners.

I mean – I’m the one who has to “sacrifice” my body for this whole shenanigan, right? What the fuck could he possibly do?

As it turns out – A LOT. Kostya has set his own bar and cleared it when it comes to our pregnancy.

He comes to every single appointment.

Shit, he actually makes all our doctor appointments. And he truly treats them like they’re our appointments, not mine. He puts all the appointments he makes on my calendar. He drives us there and back. He comes into the back room with me. He’s an active participant. He asks questions. He takes notes on his phone of the things the doctor says. He takes photos or videos of ultrasounds when it’s allowed.

He’s taken on a lot more around the house.

Around weeks four or five of pregnancy I really started to become rather, well, useless. I’ve never been so tired in my entire life. Simple daily tasks like eating breakfast would require a nap afterwards. That’s if I didn’t feel like I wanted to throw said breakfast up.

I had no energy to get up and feed our pets, make our bed, do household chores – really, to do anything. And Kostya immediately leaned in, pushed me to take all the rest I needed, and made sure everything that needed doing was done. With zero guilt applied. When I felt like I was “doing nothing” he reminded me I was, and I quote, “growing a neural tube.”

There are so many unknowns in pregnancy (and in parenting, I imagine). If you want to find something to worry about, you certainly will. I spent the early weeks of pregnancy pretty anxious that something would go wrong.

Shit, I still feel like that. We have one more round of bloodwork at 16 weeks and I’m nervous for it.

But ultimately – we can’t control anything. Kostya constantly reminded me of that. He cut me off from WebMD (lol). He validated how I was feeling, while also soothing my fears. He’s smart enough to never hit me with a, “Don’t worry!” or a “Stop stressing!” Instead he’d say, “What you’re feeling is valid. Let’s look at what else is true.” And then rattle off all the positive statistics about how things could go right instead of wrong.

I’ll give the man even more credit – in the moments I’ve felt truly physically awful, he legitimately has said to me, “Just tell me what you want – whatever it is I’ll do it, I’ll go get it!”

Sometimes I honestly didn’t know what I wanted. No food sounded good. Nothing sounded like it would make me feel better. He’s taken it all in stride.

I couldn’t ask for a better partner than Kostya on this journey. So if you’re reading this one, bub – LOVE YA.

That’s all I’ve got for ya’ll right now

But I’ll be updating my journey here and over on Instagram, so I’ll see ya around. 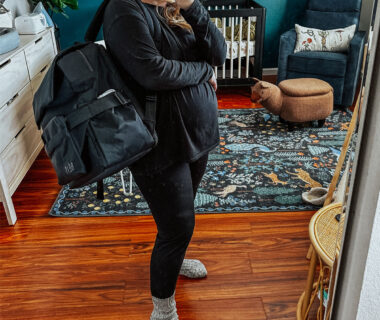 Our Beis Diaper Bag: What’s Inside + My Thoughts 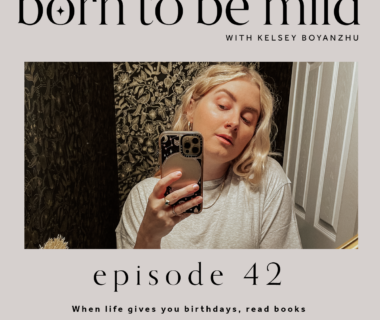