WE’RE ENGAGED. How He Proposed in Paris!

Guys. I’m currently sitting bundled up on a train headed from Paris to Brussels…AND WE’RE ENGAGED. I’m still sort of losing my mind that this even happened, and in Paris of all places.
I probably won’t get this post live until a week or so later (as soon as the photos you see in this post make it into my hot little hands!), but I wanted to make sure I sat down and wrote this as soon as possible while this whole shabang is still super fresh in my mind.
DID I MENTION WE’RE ENGAGED. Lolz.
So here’s the story… 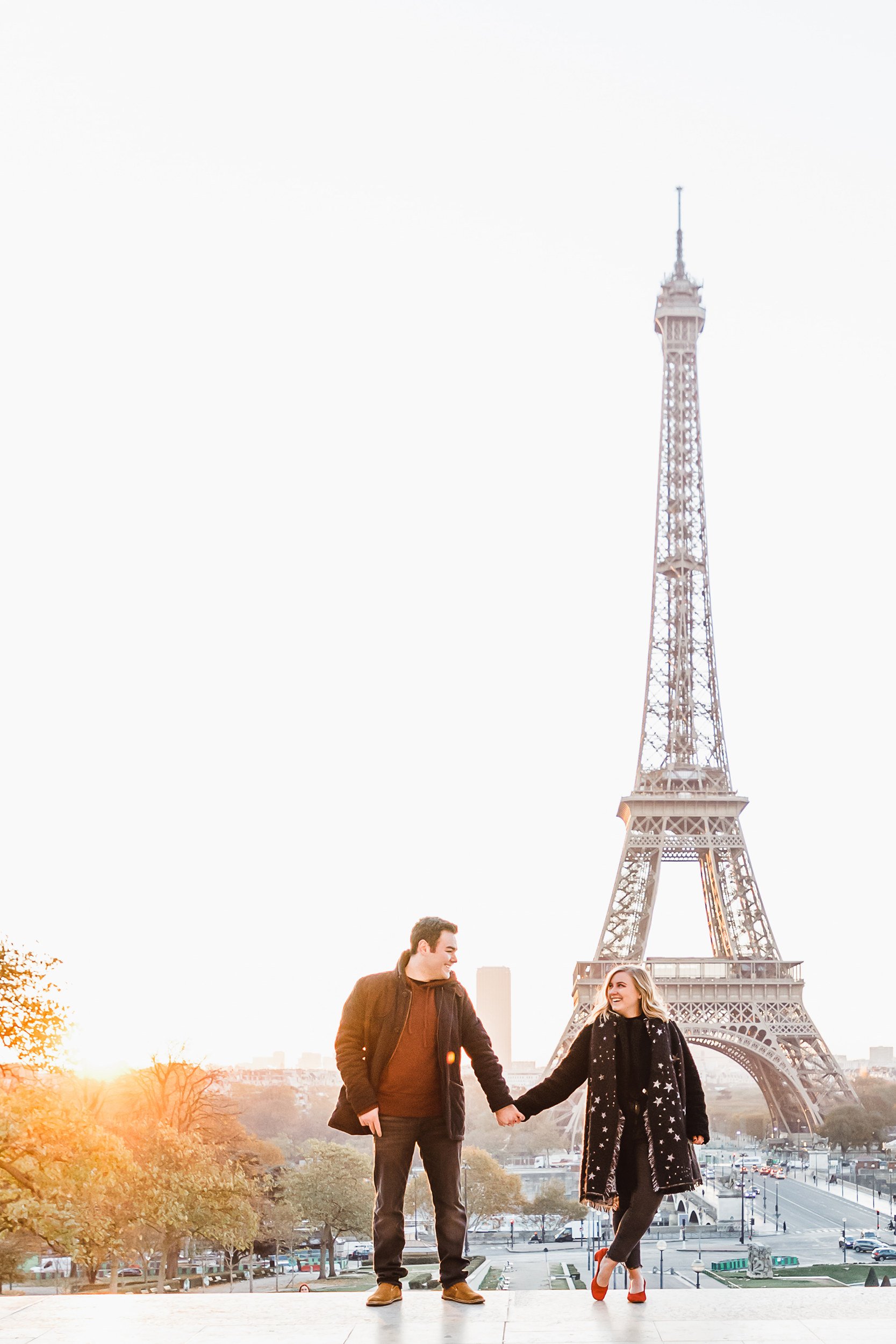 I had so many people ask me before our planned trip to France and Belgium if I thought he was going to propose. The truth is I hoped so – but I really didn’t want to set that as an expectation. We just hit our five year mark this past summer, so I knew there was some possibility. But I really didn’t want to get set on anything. I still wanted it to be an amazing adventure even if he didn’t propose (with no traces of disappointment), so tried to keep expectations low.
We landed in Paris at the unholy 6 am hour on Sunday and made our way over to our hotel. Unfortunately, because it was so early, our room wasn’t ready. We felt comfortable leaving our big suitcases, but made the decision to take our carry on bags (a tote for me and a backpack for him) because we had too many valuable items in them.
We spent some time walking around Paris and ended up at the Musée d’Orsay. We breezed through security, bags still in possession, and we started to walk into the main gallery when a guard came up and pointed out KB’s backpack. He was told his bag had to be taken to the coat check. I remember saying casually “Oh, no worries, give me your laptop and I’ll carry it in my tote!” KB still looked annoyed and said, “I have a lot of other valuables in that bag.”
HAAAA I obviously had no idea at this point that the ring was in the bag he was just forced to check into a public coat check. LOL. I give him credit for how calm he was.
We turned in early for the night because I had booked a blog photoshoot for early the next morning. Getting some photos in Paris was too good of an opportunity to miss, and I had been telling KB I’d love if we could do the bulk of the shoot together as my souvenir to take home (good photos!). Because he’s always taking pictures of me for my own content, we rarely get any shots together.
Again – it had crossed my mind at a point or two that this could be an opportunity for bubba to propose, but there were just too many X factors I couldn’t reconcile. My parents kept asking me when we’re getting married, so I thought he hasn’t asked them yet. He didn’t know what photographer I booked, so it was unlikely there’d be any plotting. And most of all – he seemed way too calm.
I even texted a close girlfriend confirming, “I don’t think IT is going to happen at the shoot. It’s the night before the shoot and he seems too relaxed.”
So just like that. Boom. I had written off the possibility. 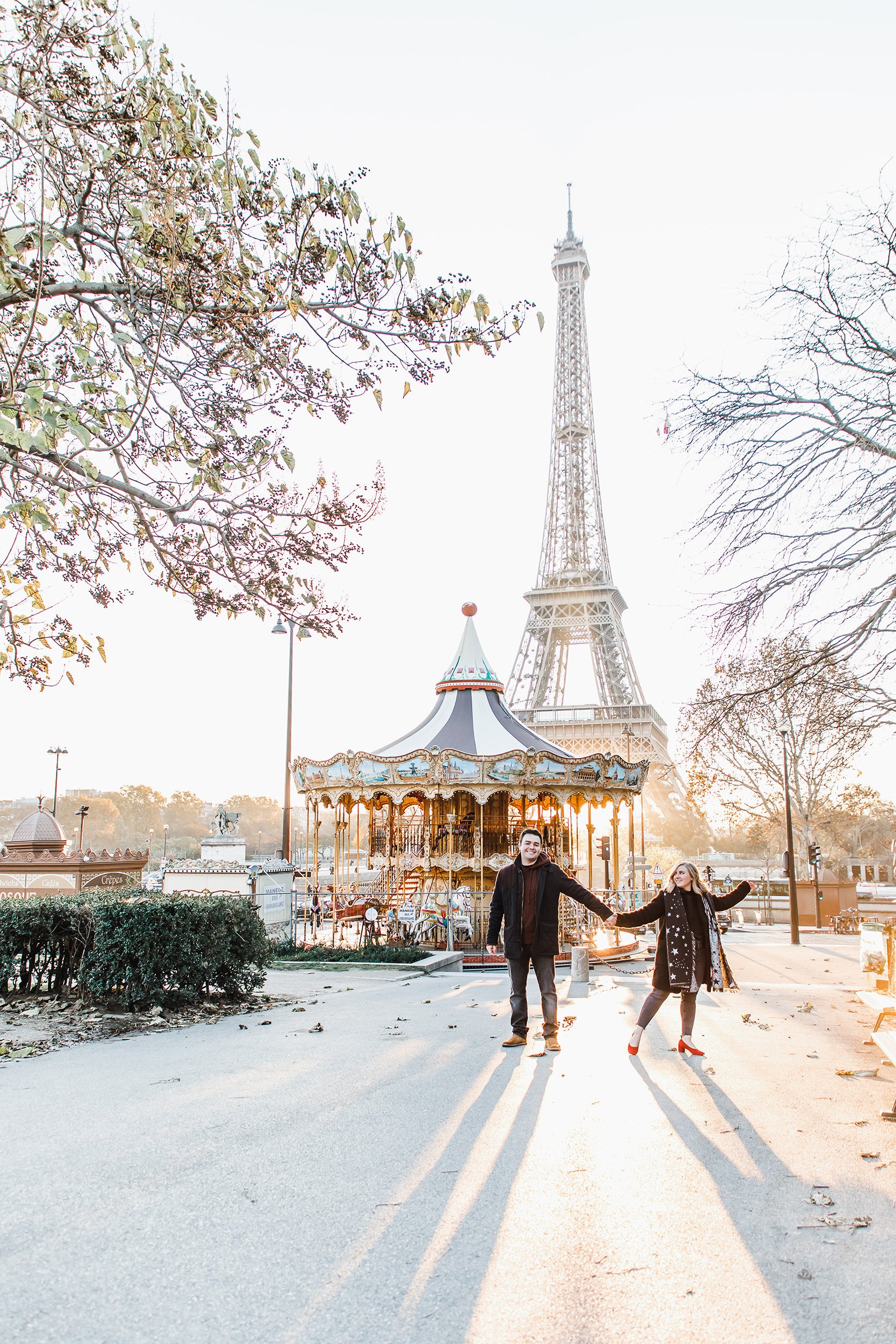 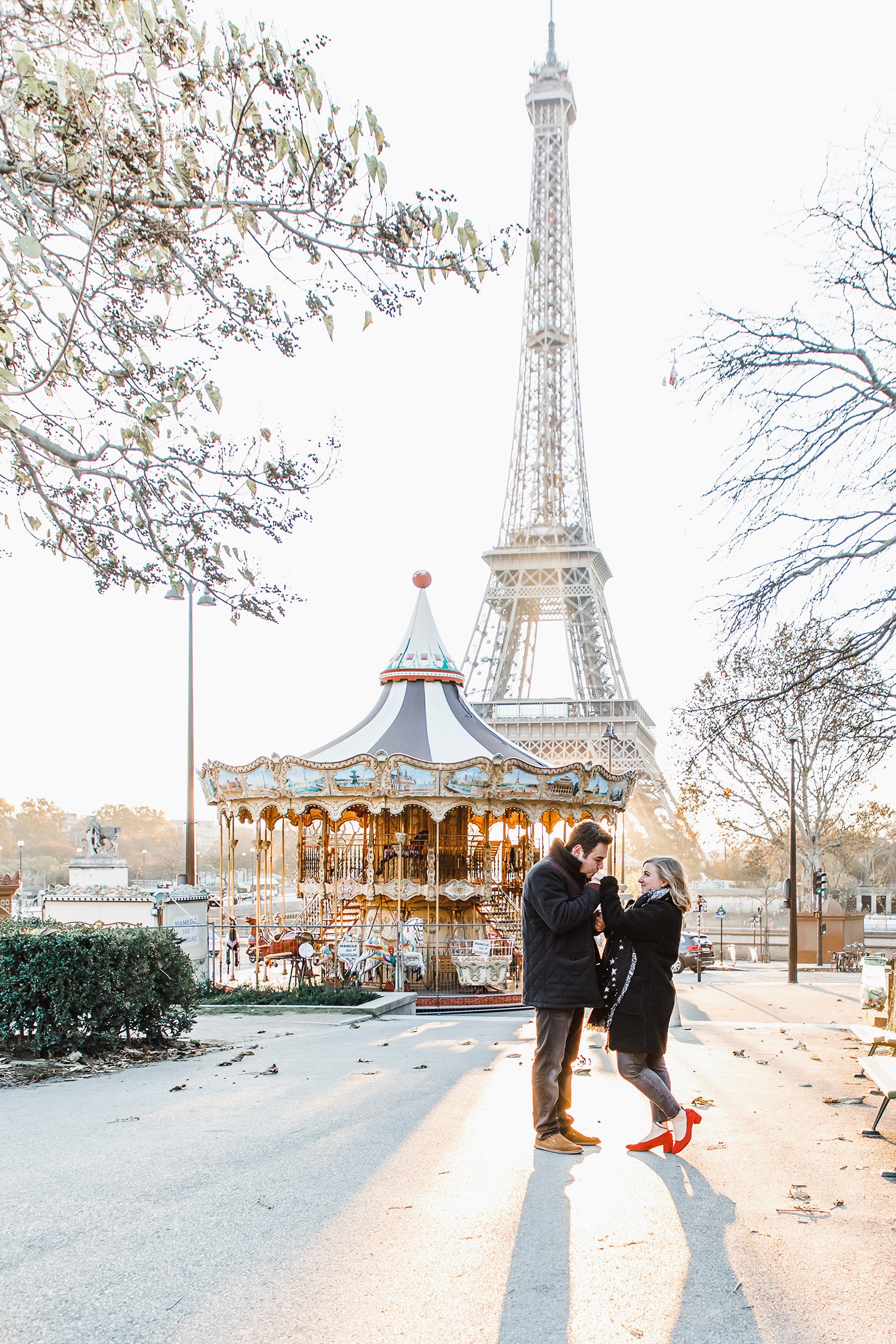 We woke up at like, no joke, 4 am that morning because HELLO jet lag. It’s the worst. We just hung out and chatted until we had to start heading over to the shoot location: the Trocadero overlooking the Eiffel Tower at sunrise.
I was bundled up to the MAX. It was absolutely freezing (I think in the 30’s). Our amazing photographer, Rachael, showed up and got to work helping scout the perfect first shots.
“We’ll start with some shots of just Kelsey,” she said, “because obvi we need some content.” Thinking back now…I’m pretty sure she was using me to test the backdrop and lighting. Lol – I was so clueless at this point just doing my usual one foot in front of the other blogger poses.
Rachael then instructed KB to hop on into the frame. I’m going to be real honest – this whole next part is a little bit of a blur for me. We were holding hands, the Eiffel Tower in the background behind us, click click click of the camera shutter. The next thing I know, this kid is on one knee and saying all sorts of nice little things.
I’ll keep the nuggets I do remember of what he said to myself. ?
The long story short, I said YAAAAAAASSSS. 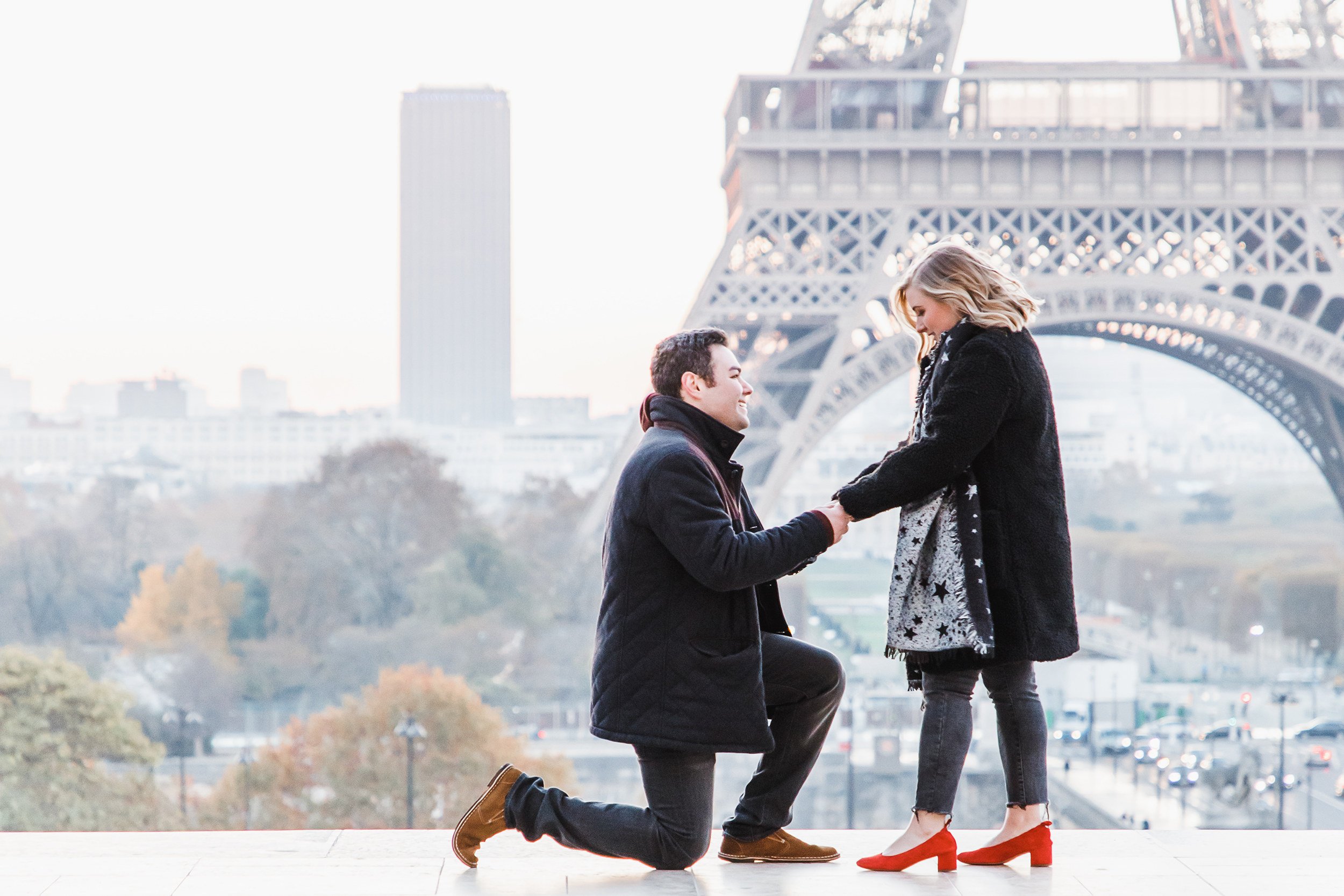 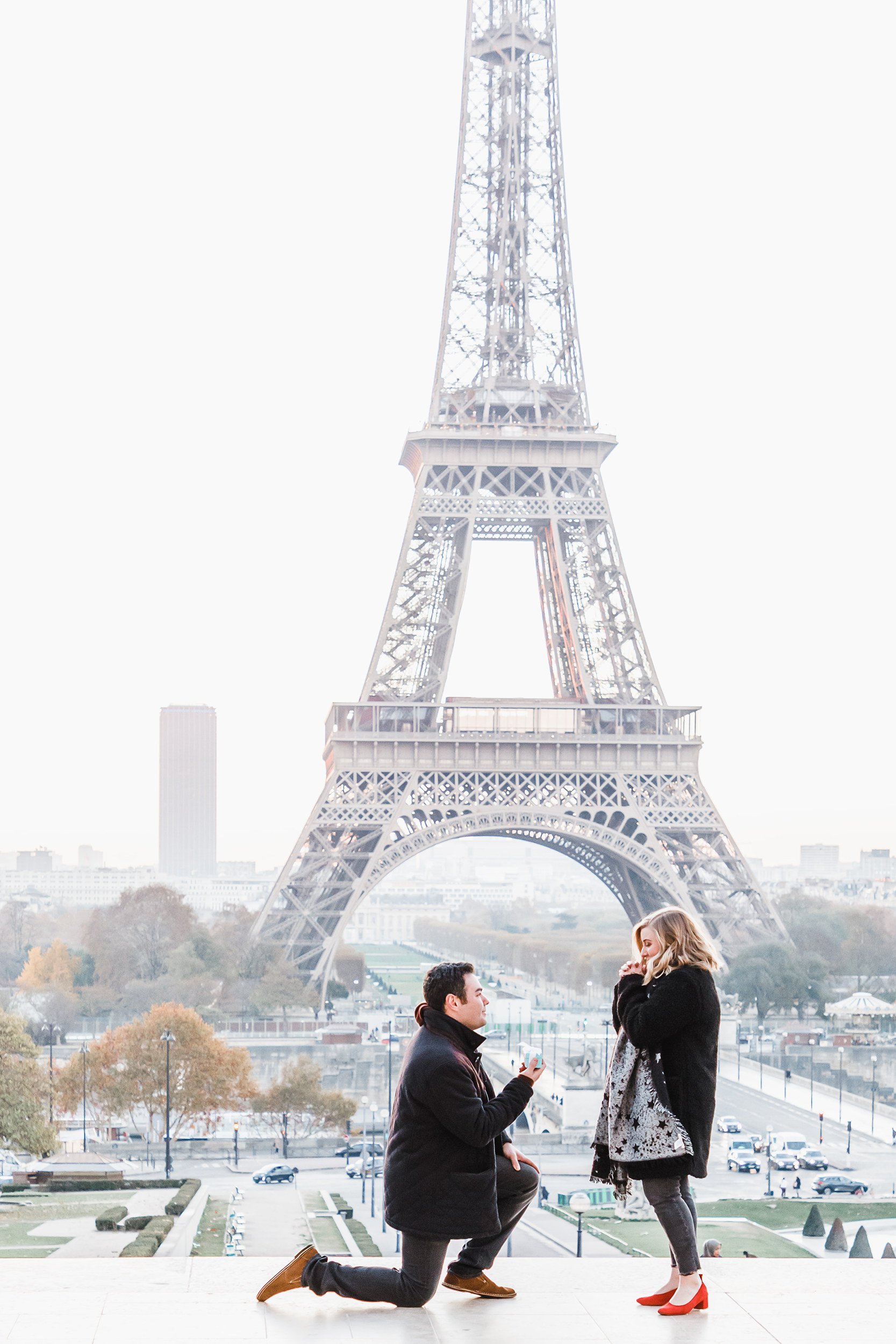 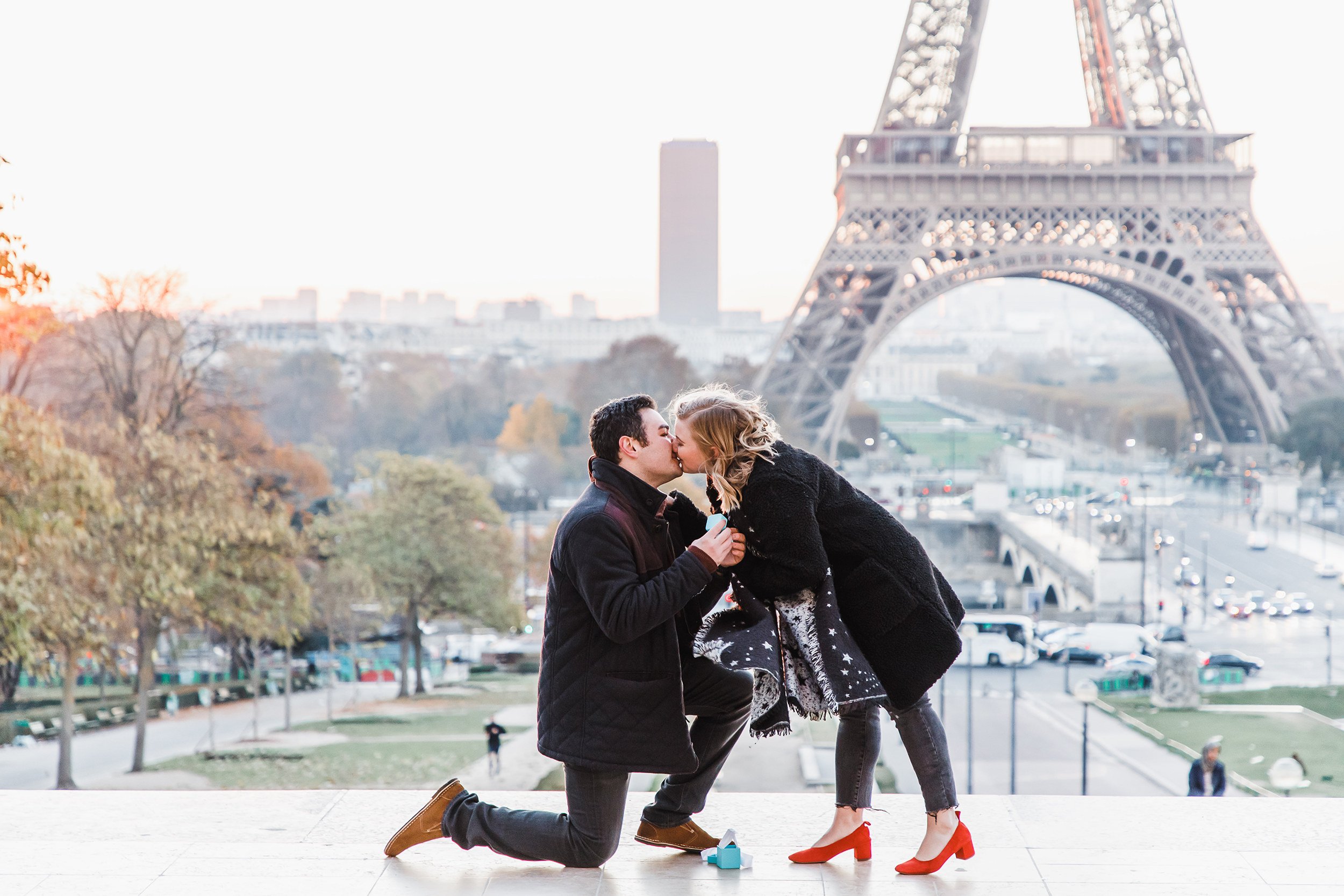 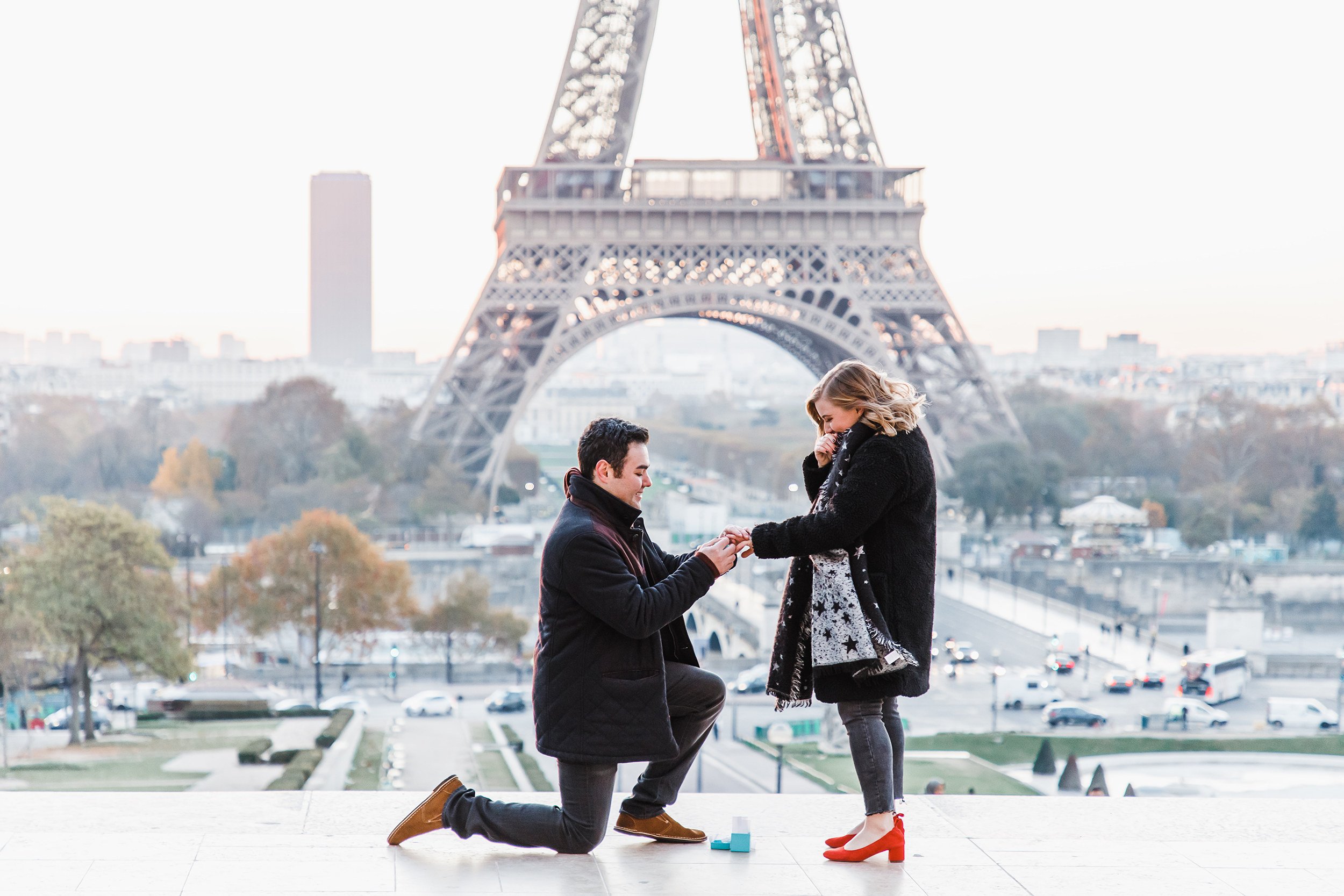 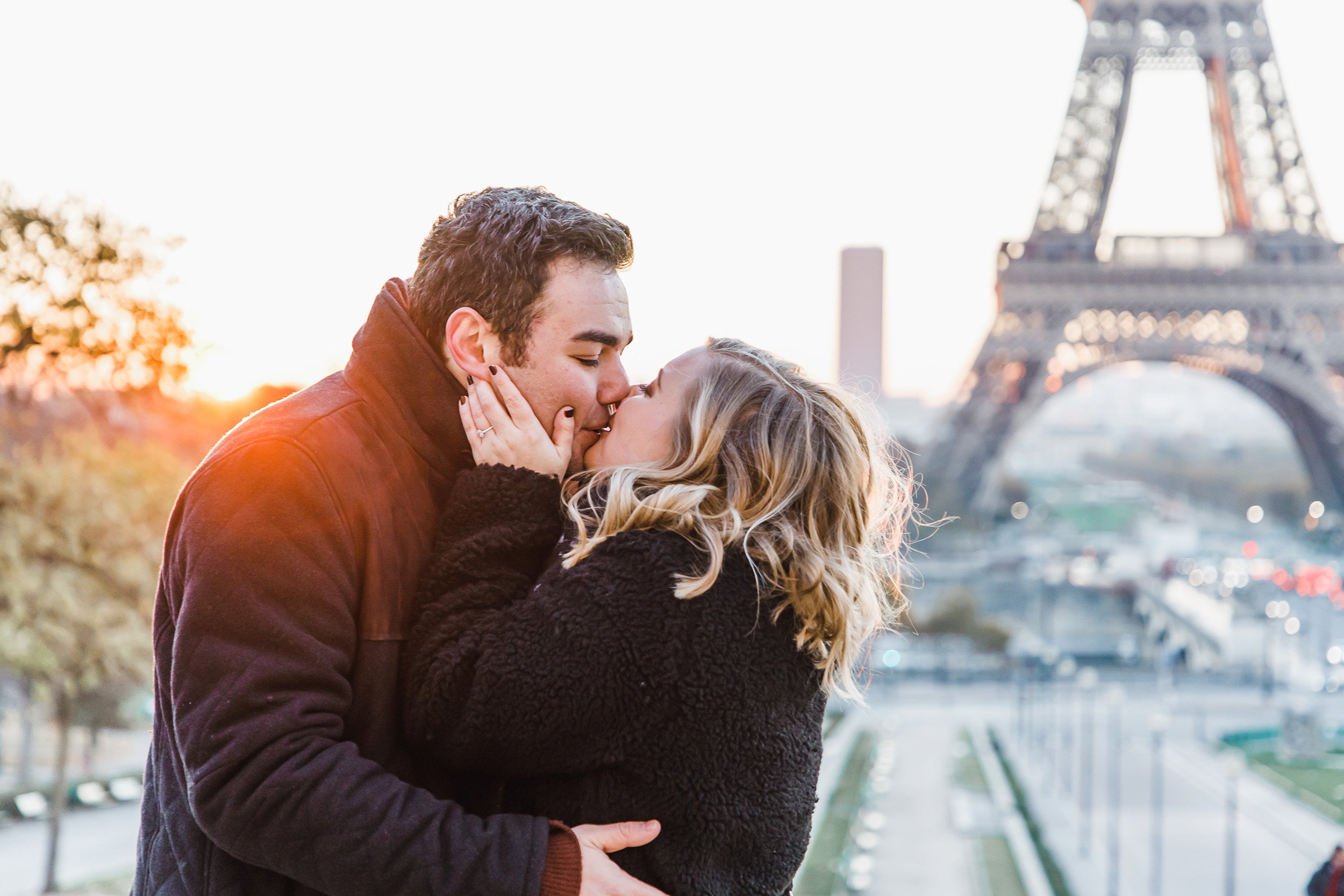 Rachael was so good at letting us have our moment, but also capturing alllll of it. We finished off our half hour shoot and squeezed in so many good photos to remember the moment.
As soon as we were done I had to get answers to alllll the questions.
We sat down for tea and breakfast and I soaked up the whole behind the scenes story.
Turns out he’s just a way better listener than I gave him credit for. When I was choosing between two photographers and was trying to get his opinion, he said I mentioned the Instagram handle of the person I chose (Rachael), so he was able to reach out and coordinate. She gave him tips on how to position his body, making sure my hair was tucked behind my ear so she’d be able to get my face in the shots, etc. They even came up with a “code phrase” for when she had the perfect frame and was ready for him to go down on one knee. The phrase was, “oh my gosh, this is so perfect” – for the record I don’t even remember hearing her say that lol SO CLUELESS.
As for the ring, yesss that’s a little blue box in his hand. Never in my wildest dreams would I ever think I’d be a Tiffany’s bride. I definitely have a soft spot for the brand (Breakfast at Tiffany’s is one of my all time favorite movies and my mom always had a thing for the “bean” jewelry).
But like, here’s the real irony. I tried on that same exact ring only a few weeks earlier. Like, just for fun. And it turns out I tried it on one day before he bought it.
And no – he had no idea.
“Remember that day you texted me saying you were at Tiffany’s buying an earring after work?” he said. “I had been into Tiffany’s the day before looking at rings and was planning to go back that day to buy it.”
Ummm so like it’s a good thing I texted him yapping about my earring shopping because he had to avoid avoid avoid! LOL!
While I was in Tiffany’s buying my new earring, my awesome sales associate had me try on engagement rings for fun. WHO FREAKING KNEW my future fiancé would end up buying one I tried on during a solo Tiffany’s shopping sesh. I didn’t even take any photos of what I tried on. In fact, I didn’t even tell him what rings I tried on at all.
So yeah, he popped into the store the next day – with zero knowledge of what rings I tried on or which one I liked best – and made his purchase.
If that’s not the funniest little coincidence, I don’t know what is.
But back to the ring specifics. KB picked out a beautiful oval shaped engagement ring with a beautiful halo and diamonds on the band. It’s legitimately the most sparkly thing I’ve ever seen in my life. I’m THAT obnoxious human that keeps staring at my own hand in public.
He’s such a good little human. He knew I wanted an oval shape, but that was pretty much the only info I had ever given to him. He told me over tea and eggs that chilly Paris morning after our proposal that he had been deciding between two ring options and went with the halo.
GOOD CHOICE, HONEY. Nailed it. 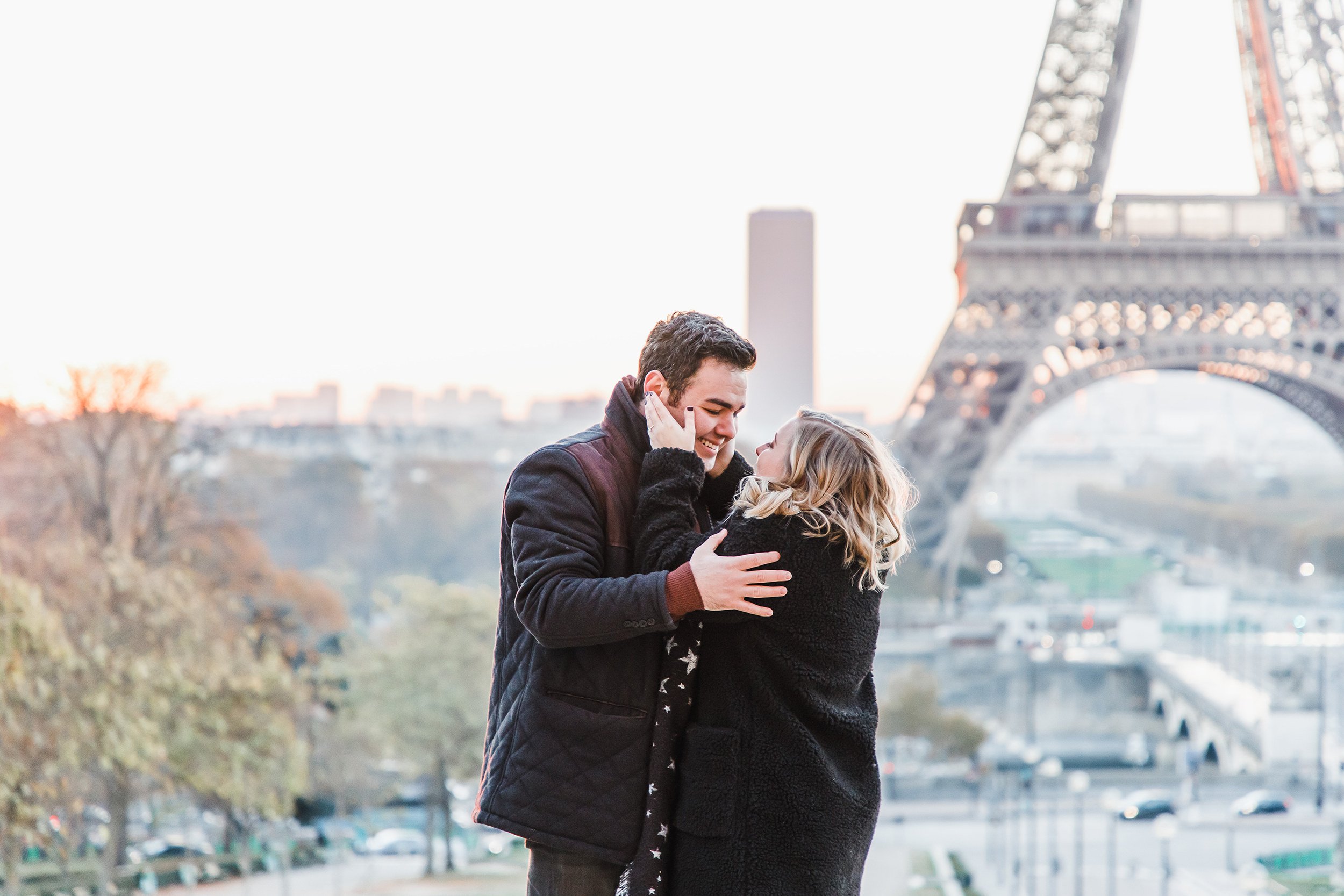 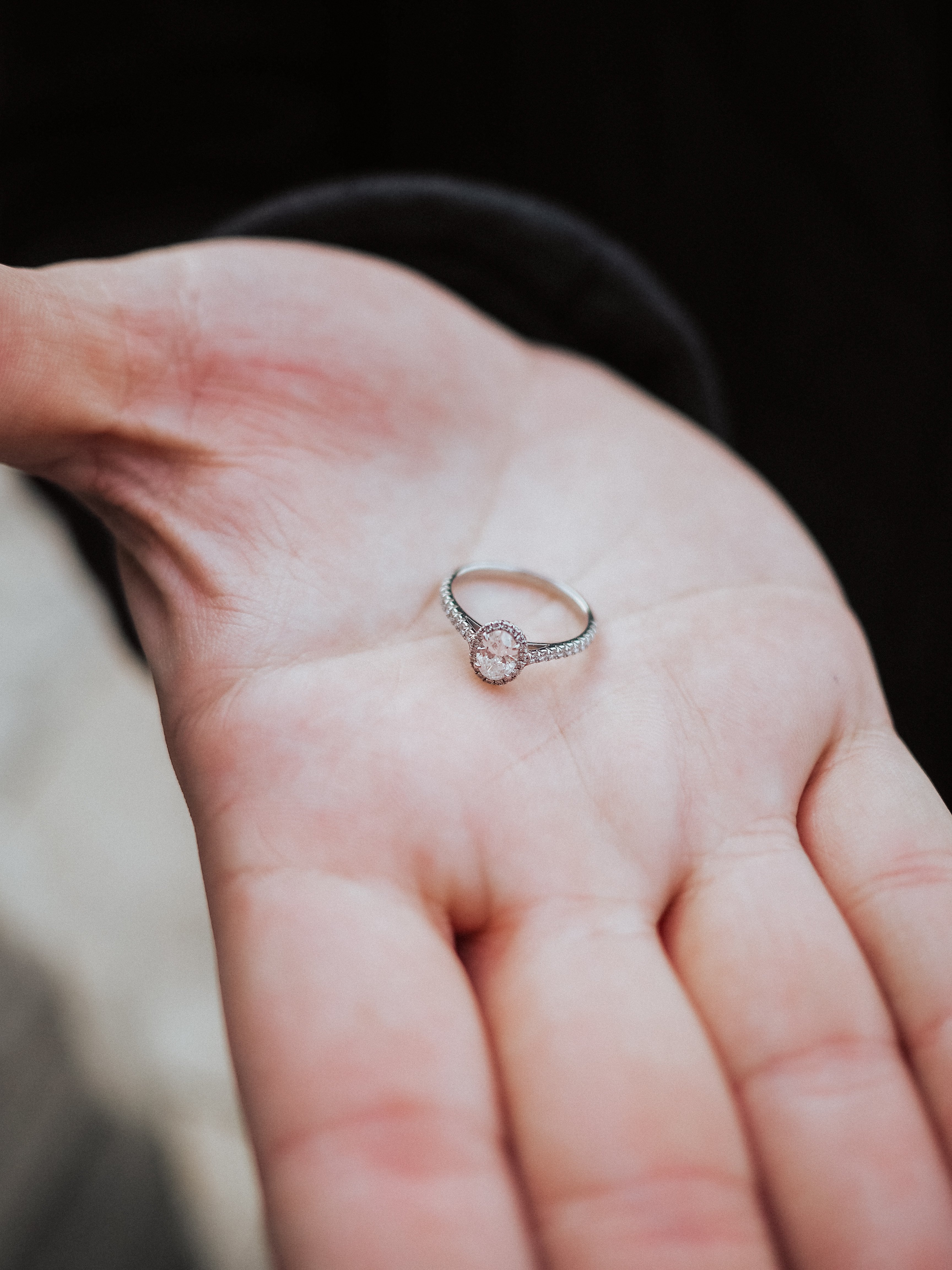 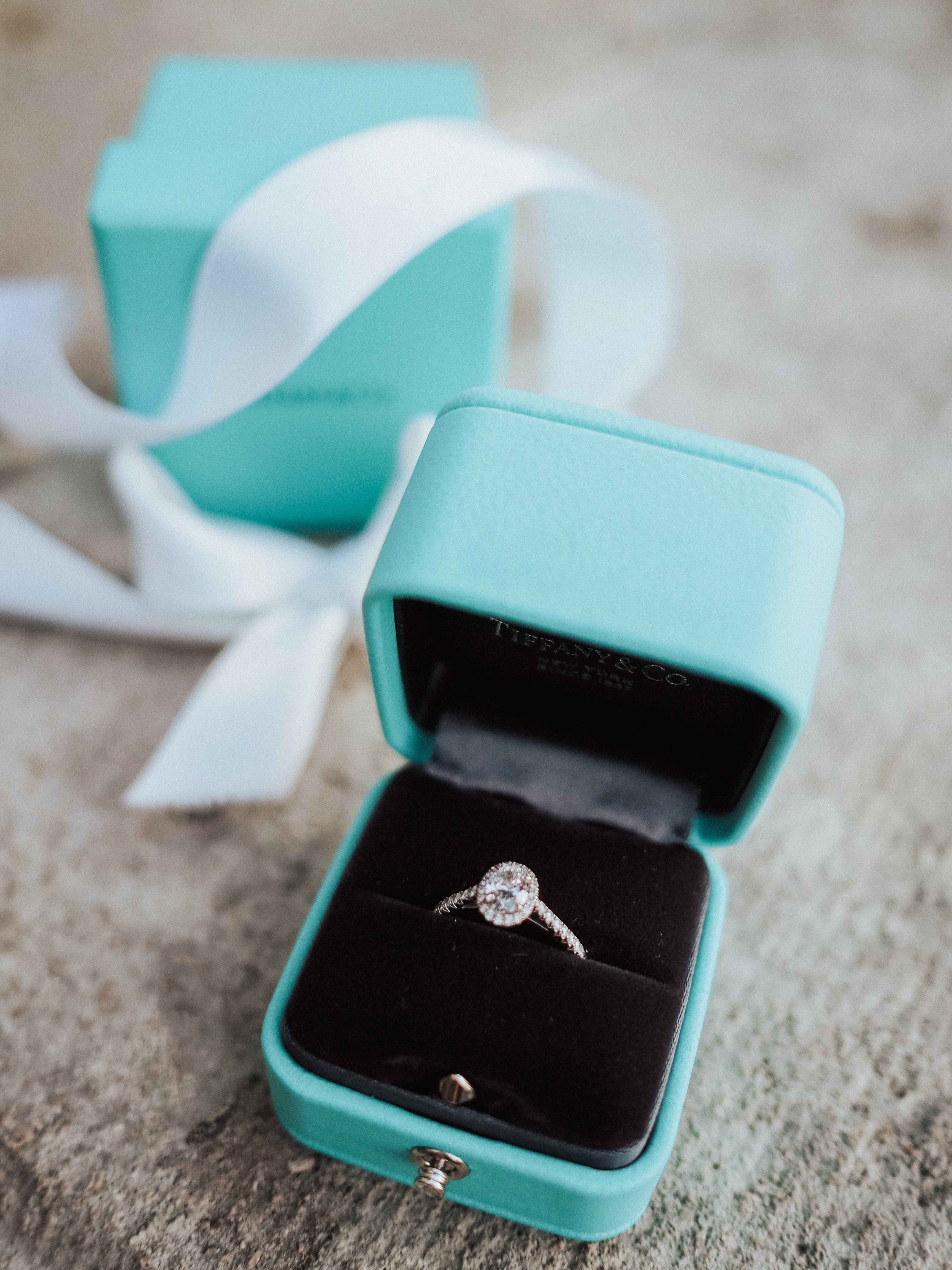 He had been keeping the ring stashed in a sock inside his backpack with a little note inside that read, “Engagement ring – please be discreet!” in case TSA chose to take a look. So hilarious, I die.
Which this also explains why he was upset to leave his backpack at Musée d’Orsay security. He honestly seemed to get over it super quick, I seriously was none the wiser that he had this super important item in his bag.
He also apparently did ask my parents. This piece threw me off the scent the most because, love them, but my family was kind of annoying with asking when we were going to get engaged.
So yeah, good ol’ mama had been asking recently. Even my dad had asked on our last family trip. So really I was fairly convinced a proposal wasn’t in the works any time soon.
Turns out he gave my dad a call a few days before our trip to get his blessing. Such a good little egg. It also left barely any time for someone to accidentally let the good news slip.
I’d say I’m the planner in our relationship, so I really gotta give it to him, my man PLANNED. And I was really none the wiser. I thought I’d leave Paris with some amazing souvenir photos of us on our trip – now we’re leaving with the memories of a proposal of a lifetime. 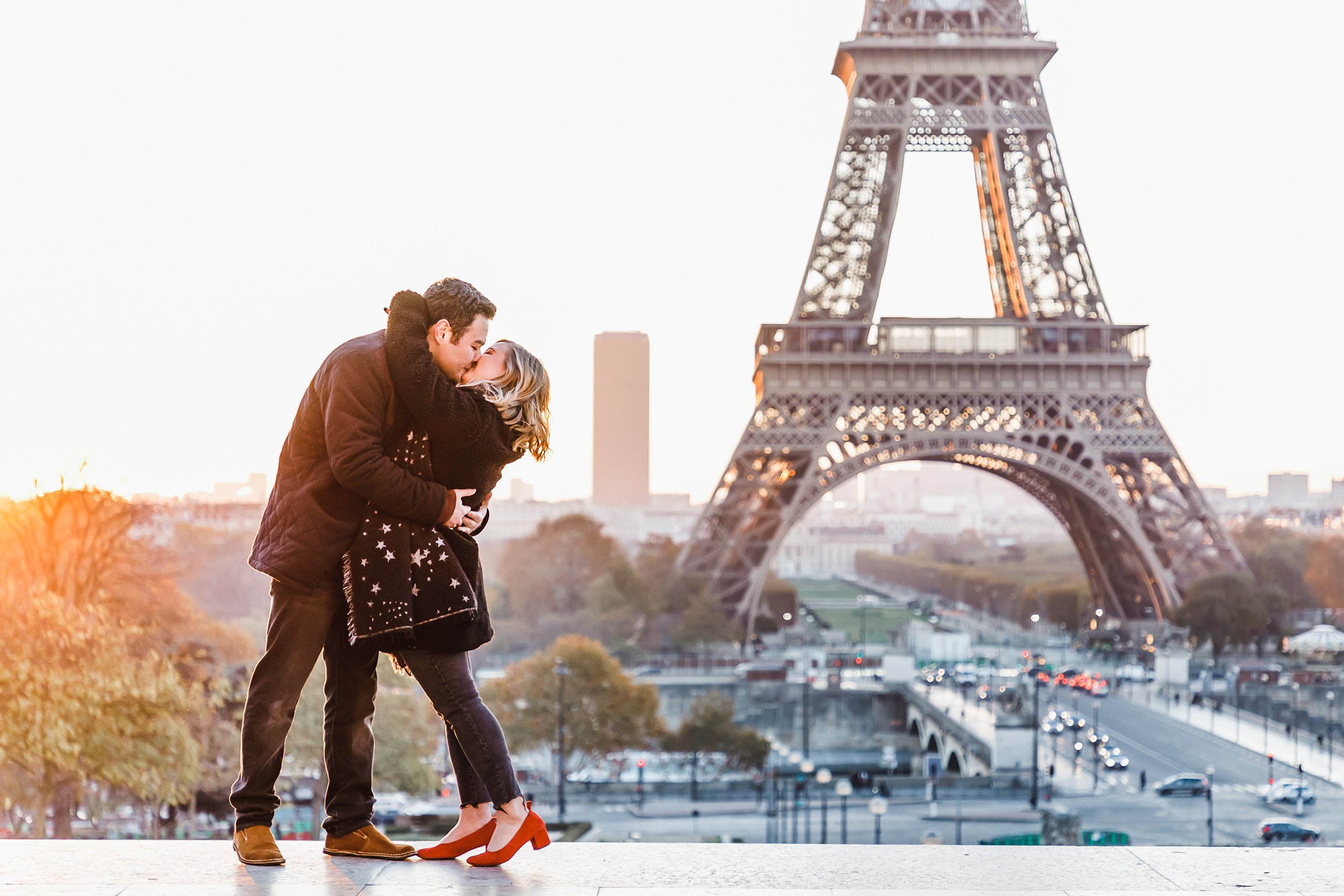 A massive thank you to Rachael for making our moment the best ever and capturing photos that seriously make me want to cry every time I look at them. If you’re headed to Paris and need a photog I can’t recommend her enough!
Also a huge thank you to alllll our amazing friends, family, and social media family that have been reaching out and celebrating the moment with us. We’re just so overwhelmed with gratitude and love.
This has been the trip of a lifetime, and as I’m writing this, it’s not even halfway done!
Love you guys!

Rent the Runway for Brides