I’ve always been a pet person. I still remember when we got my puppy way back in middle school. An adorable shitzu named Milo. We unfortunately had to give him to family friends because he was too much work for our family of five. Puppies take a ton of energy and I was a spoiled eighth grader who left all the work to my mom. I’ve wanted another pet ever since.

KB and I work full time and as much as we’ve always thought of ourselves as “dog people,” pups are needy.

Let me clarify. Cats totally need love too. But a cute little kitty can manage itself while we’re off at work.

Choosing an adoption agency is an adventure.

Once KB and I made the decision to adopt, we started to research fur baby adoption agencies. We decided to pop by Petco, a local adoption event, and the SPCA.

Petco was our first stop! KB didn’t make it too far passed the front door – they were doing puppy training. While he was distracted by fluffy pups, I made my way to the back where the cats were kept.

I’ve seriously never been so amused yet horrified in my entire life. At the back of the store, two workers had locked the door to the cat room while they tried to get an escaped kitty back into its cage. The cat had managed to climb on top of the cat condos and wedge itself into the corner of the room. The two employees had scratches all up and down their arms and were bleeding like crazy. I’m no genius, but it might’ve been because they were grabbing at the cat and trying to coax it with a broom.

I’m with the cat on this one. If humans were hitting me with a broom I’d scratch their eyeballs out too.

KB and I had some laughs but ultimately we were too horrified watching how the cats were treated to stick around.

After the fiasco that was Petco, we made our way to our local Petfood Express. A mom and pop adoption operation had brought in some kittens! They were seriously so adorable and the work they do is amazing, but none of the cats had all their shots or a guarantee of good health. It was really hard as a first time cat owner to adopt without any official paperwork or background knowledge.

The SPCA has animal adoption down to a science. It seriously felt so surreal to walk into the SPCA and look someone in the eye and say, “we want to adopt a cat.” For us it was intimidating and scary, but the people at the SPCA match fur babies and humans up for a living.

Before we were allowed to browse the rooms, the SPCA had us sit down and fill out a survey. We answered questions about our lifestyle, how many hours a day we work, what qualities we value most in a pet, and so much more. Admittedly none of the workers reviewed our answers, but it was surprisingly helpful for us to sit down and think through those things. Identifying what we wanted in a pet helped us to have clarity as we went around looking for our perfect match.

KB and I took a lap through the six hallways filled with “cat condos.” The SPCA is even decked out with touch screens at each room, displaying photos of the cats inside along with mini biographies. Seriously high tech and seriously helpful.

I want to pause for a moment and say KB is actually really sweet and hilarious. The first cat we had a “meet & greet” with was a two year old tabby. She was incredibly adorable, but the SPCA worker in the room with us was incredibly pushy. She kept saying “if you leave this room, this cat won’t be here for even another half hour. She’s going to be adopted!”

KB being the sweetheart he is started screaming “we’ll adopt her, we’ll adopt her!!!” I had to ask for a moment of privacy and look him in the eye. “Do you even want this cat?” He slowly shook his head no.

Sweet, sweet KB. He just wants to save all the animals even if they aren’t “the one.”

And that’s the thing when looking to adopt – there’s a perfect fur baby out there for you and you just have to find “the one.” The sweet two year old tabby was beautiful, but something didn’t feel right.

KB and I moped outside the cat condo for a bit as we tried to understand why we weren’t sold on taking the tabby cat home. I decided we needed to go into at least one more room to be able to compare. We pointed at random to a small room with two five month old kittens and asked to spend a few minutes with them.

We stepped into the room and ran through our list of things we were looking for again. KB wanted a cat that was playful. I wanted a cat that was loving and affectionate. One of the kittens was like a firecracker, jumping all over the room. The other kitten was quiet, observing the strangers that had entered her room.

Picking up a cat doesn’t always end well. If you’ve ever tried, more likely than not you’ve gotten a scratch or two. But I knew I wanted a cat that would be willing to cuddle with me. I sucked it up, prepared for some pain, and reached for the quiet kitty named “Popcorn.”

And then it happened. She let me flip her on her back and hold her like a baby. She looked up at me and extended her arms (cat language for “rub my belly, please”). My heart actually broke. This was my cat.

KB wasn’t totally sold. I didn’t want him to feel the pressure from the SPCA worker again, so we stepped out to have a moment alone. He was worried the cat was loving but wasn’t playful. The kittens were sticking their paws under the door trying to get to us, so I told him to wiggle his finger under there for her to gauge her reaction.

KB then stuck a piece of paper under the door and wiggled it back and forth. The little kitten lost her mind, swatting at the paper and spinning in circles. KB was dying laughing as he turned back to me. 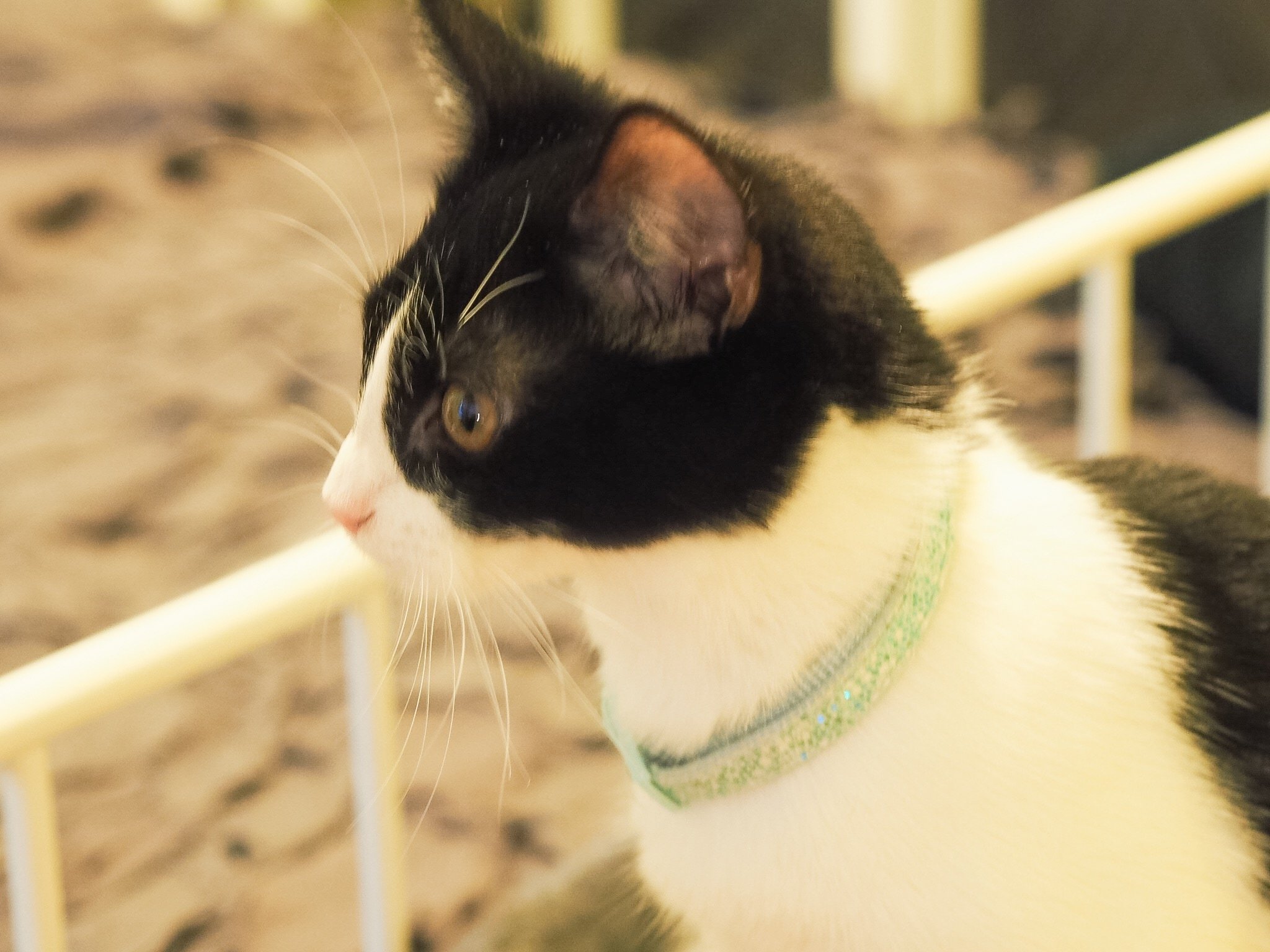 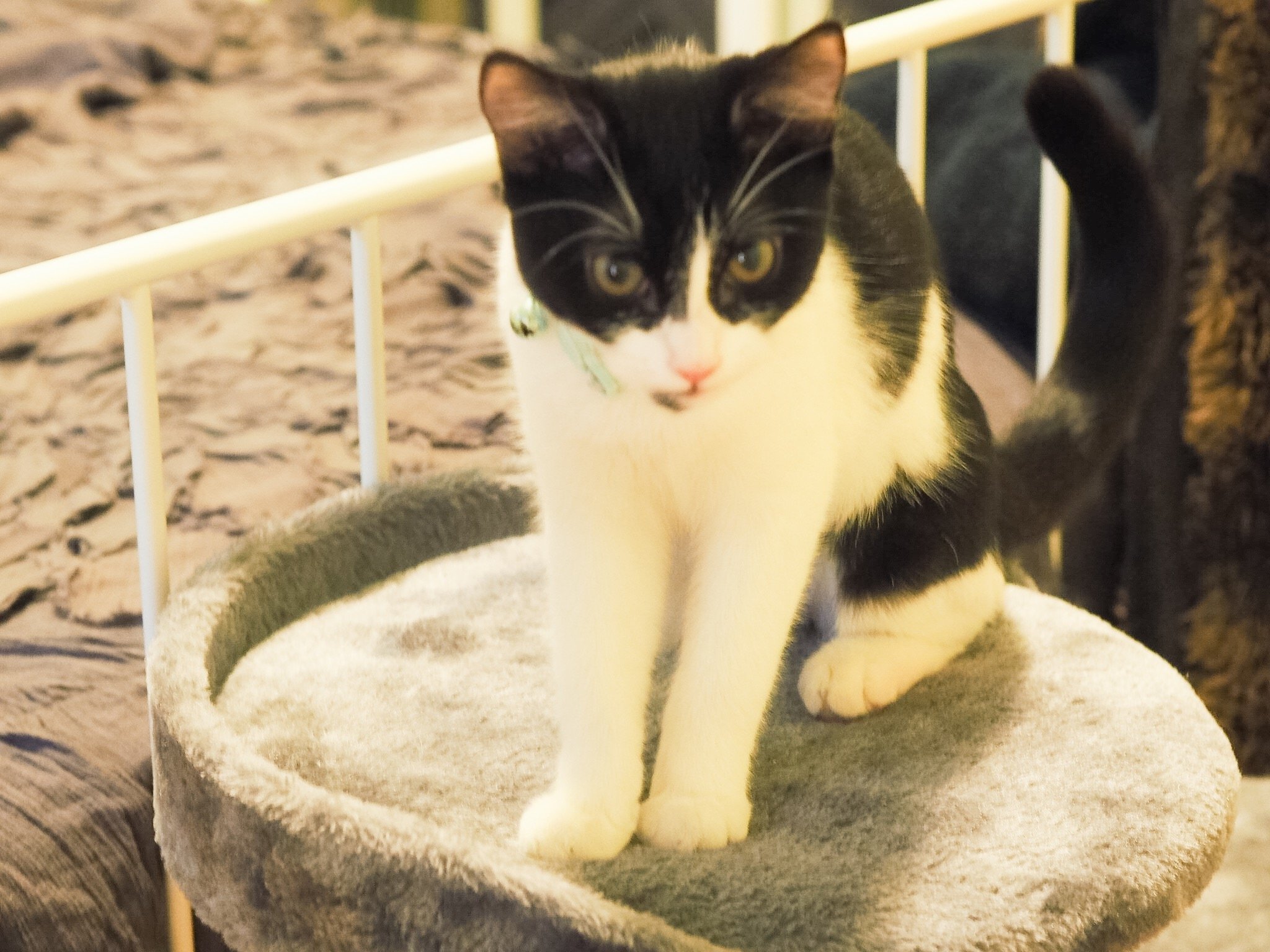 The first few nights are the hardest.

The high of adopting Popcorn lasted maybe a half hour. I’m not saying this because I’m not in love with her (I’m actually disgustingly in love with her). I’m saying this because being a new cat owner is hard. Popcorn meowed, crying like crazy the entire ride home. We thought it would stop once we got her safely into the apartment, but she continued to cry for the remainder of the weekend.

Popcorn was totally fine if one of us was in the room with her, but any time we left she would meow and meow begging us to come back. I have no idea what she had been through before her time at the SPCA, but she was probably abandoned. She probably thought every time we left to run an errand she was being abandoned all over again.

The first few nights were the hardest. After a long weekend of us leaving and reentering – and a full week back at work – she’s started to understand that we come back to her every time. She cries less and less as the days go by and it’s been awesome to watch her adjust to her new home! 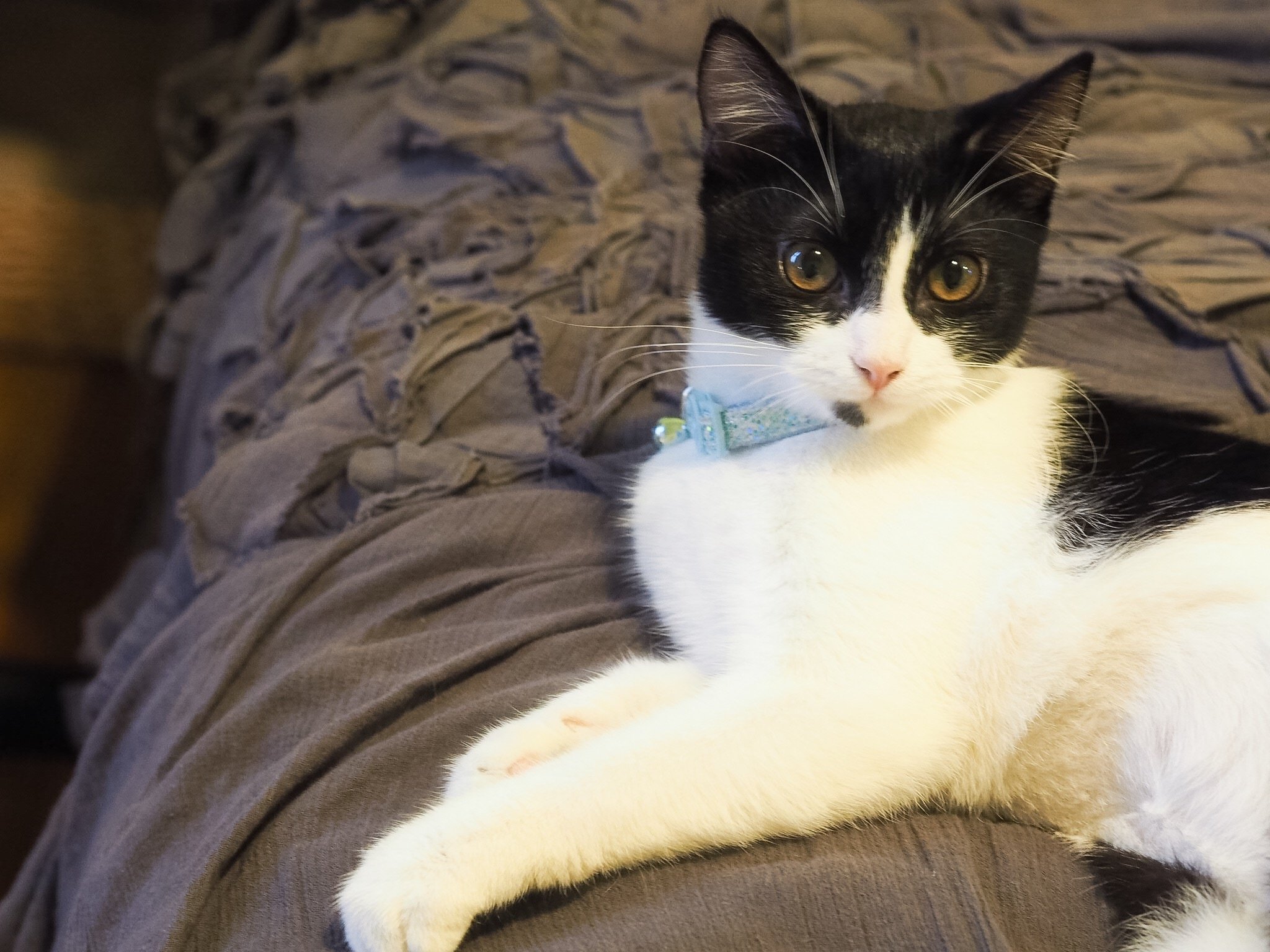 I’m just going to be real – a meowing kitten is like a crying baby. Seriously the sound is like a knife to the heart. When Popcorn meows at the door she sounds like she’s dying.

We adopted Popcorn on a Saturday and didn’t have to return to work until Tuesday. That weekend was the longest of my life. I was having anxiety and panic attacks. Did I make a mistake? This cat keeps crying – can I give it a good home? What did I do? Why did I do this?! I even had moments where I thought we’d need to bring her back to the SPCA. The guilt from these thoughts only made the panic attacks worse.

A quick Google search made me realize that “post adoption depression” is a real thing. Sure, it’s a funny play on the serious issue that is postpartum depression. But a lot of people have feelings of anxiety and regret after adopting a new cat (or pup!). I’ve realized it’s because it’s not only the animal that is adjusting – you are too. 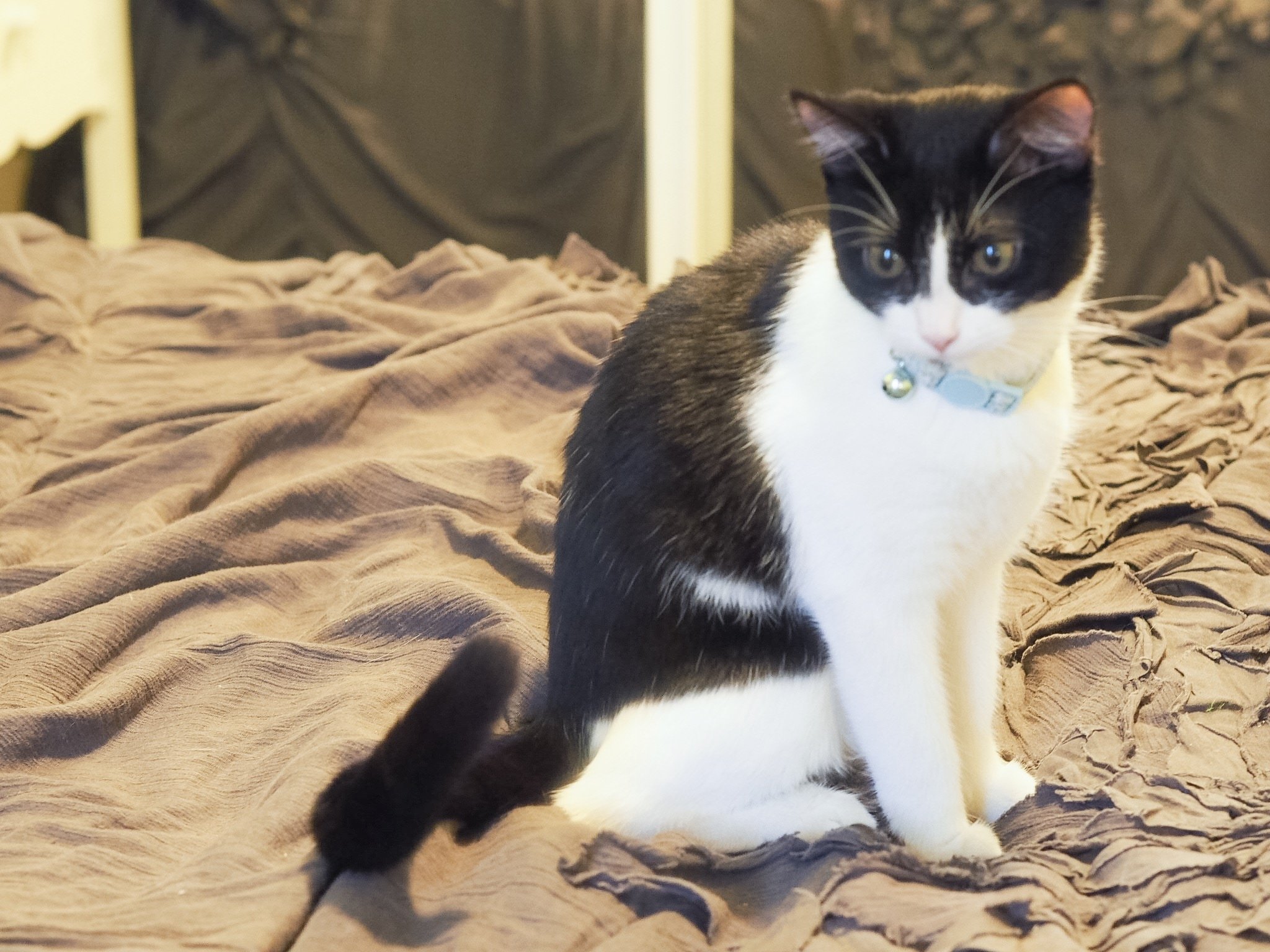 You’ll get into a routine.

Here’s the good news – the anxiety totally goes away. You and your new fur baby will find your own routine.

Going back to work was a huge help. Popcorn now knows what a normal week will look like in our household. We wake up, play with her, feed her, and head off to work. She spends all day playing with interactive toys in between kitten naps on our gigantic guest bed (she’s kind of a princess who refuses to sleep in the bed we bought her). When we get home we give her lots of love, some playtime, and a good dinner.

We’re starting to find our routine and it feels so good.

Forget what you’ve heard – cats can be super affectionate.

If you don’t follow me on Snapchat, now is the time (blondebagel). Because if you’re someone who thinks cats aren’t affectionate – I’m about to prove you wrong.

Popcorn is a lap cat. Whatever we’re doing, she has to be right there next to us. She’s not outright needy, but as we wander the apartment we’ll notice we have a quiet kitty shadow. She loves to play and be pet. She loves her humans.

If you’re someone who’s on the fence about adopting a cat because you’re worried they aren’t loving – fear not. Seriously. My Snapchat is filled with snaps of Popcorn kneading me like a pizza and letting me snuggle her pretty hard. 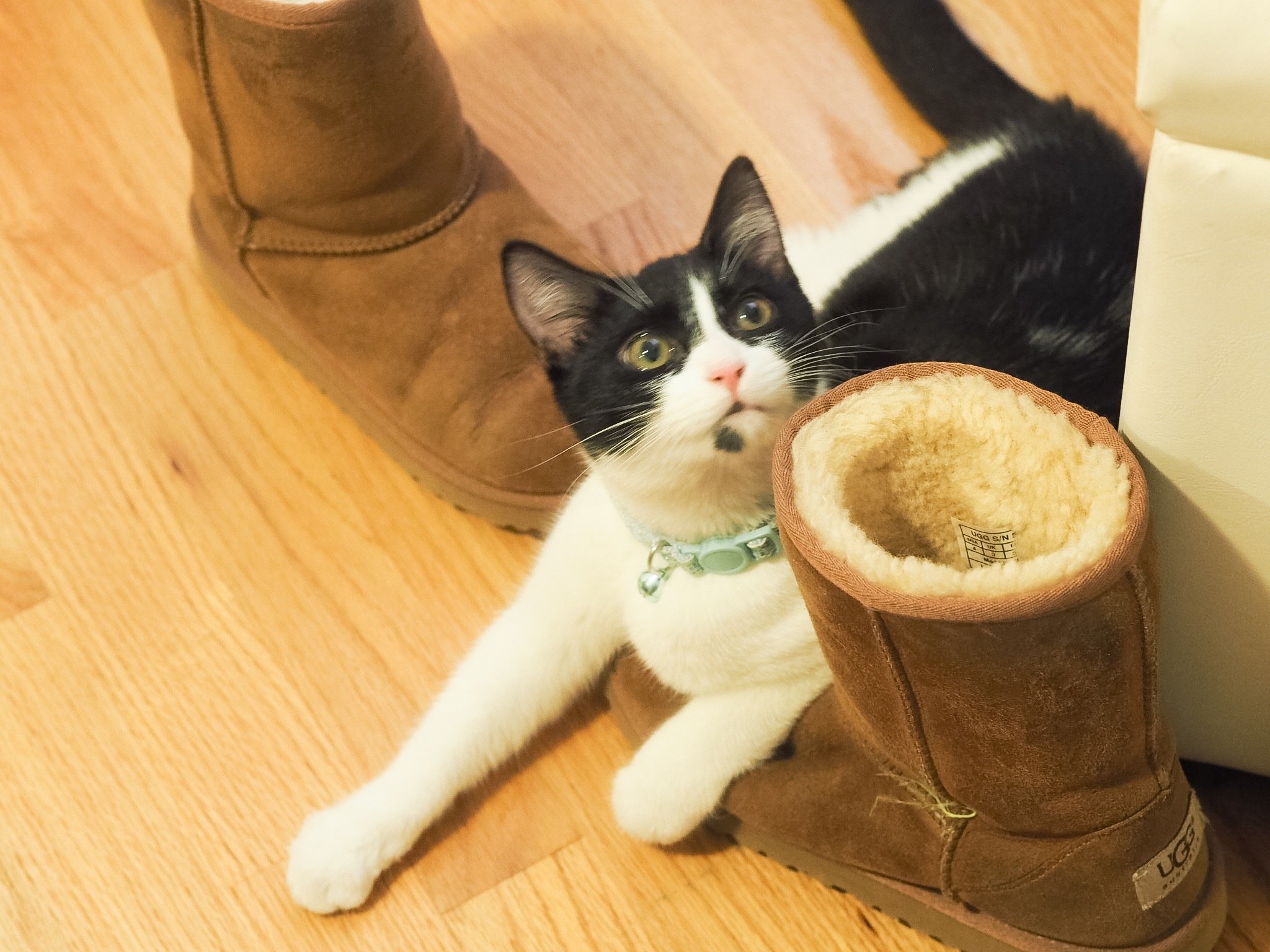 Adopting an animal is one of the most rewarding things you can do.

It’s really awesome to save a life. Walking up and down those halls at the SPCA made me realize just how many fur babies need a good home.

I’m so happy that KB and I made the decision to adopt. We are such proud new cat owners! The last week of our lives has been filled with so much laughter and love.

Sometimes I wonder who saved who.

Do you have a pet? Tell me about your fur baby in the comments below!

Hydro Flask Addiction – Is It Worth…

How to Get Better Sleep

6 responses to “Meet My New Kitten!”