As a resident of San Francisco I consider myself exceptionally lucky that a “staycation” can be as easy (and undeniably gorgeous) as Big Sur. The boyfriend, KB, and I decided to map out a weekend road trip starting in San Francisco and making our way down the coast enjoying many stops along the way. Big Sur itself actually has no specific boundaries, though many associate it with the stretch of land located along the California coast between  Carmel in Monterey all the way down to San Louis Obispo. We just barely scratched the surface of Big Sur only making it as far south as Julia Pfeiffer Burns State Park, but were blown away by all the views of vibrant blue water and stunning rock formations that make up the California coastline.

I wasn’t able to leave San Francisco until around 4 pm, so KB was strategic in planning our stops along our way to our b&b. Living in San Francisco it’s easy to take for granted that nature exists in spaces outside of Golden Gate Park and Baker Beach, but the drive down towards Aptos didn’t take long to be beautiful – we were hit with stunning ocean views as soon as we reached Pacifica and they just kept on rolling! KB drove us along until we turned off into a parking lot at the top of a hill – our first lighthouse stop! We walked down the path to Point Montara Lighthouse, a lighthouse and hostel nestled on the cliffs with amazing ocean views. We sat on the benches under the lighthouse itself, soaking in the sea breeze. There was also a path just behind the hostel that allowed for some scenic views of the beach below! 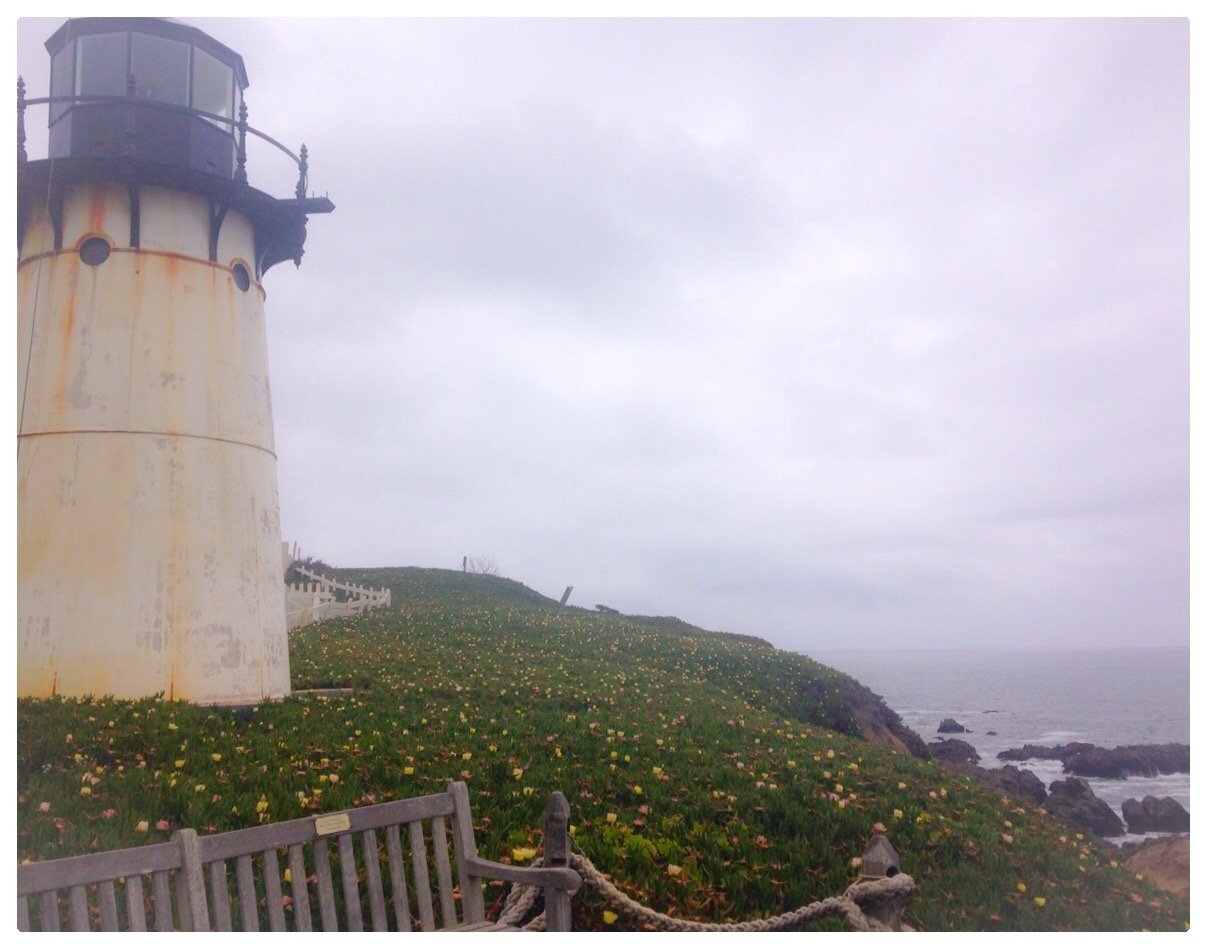 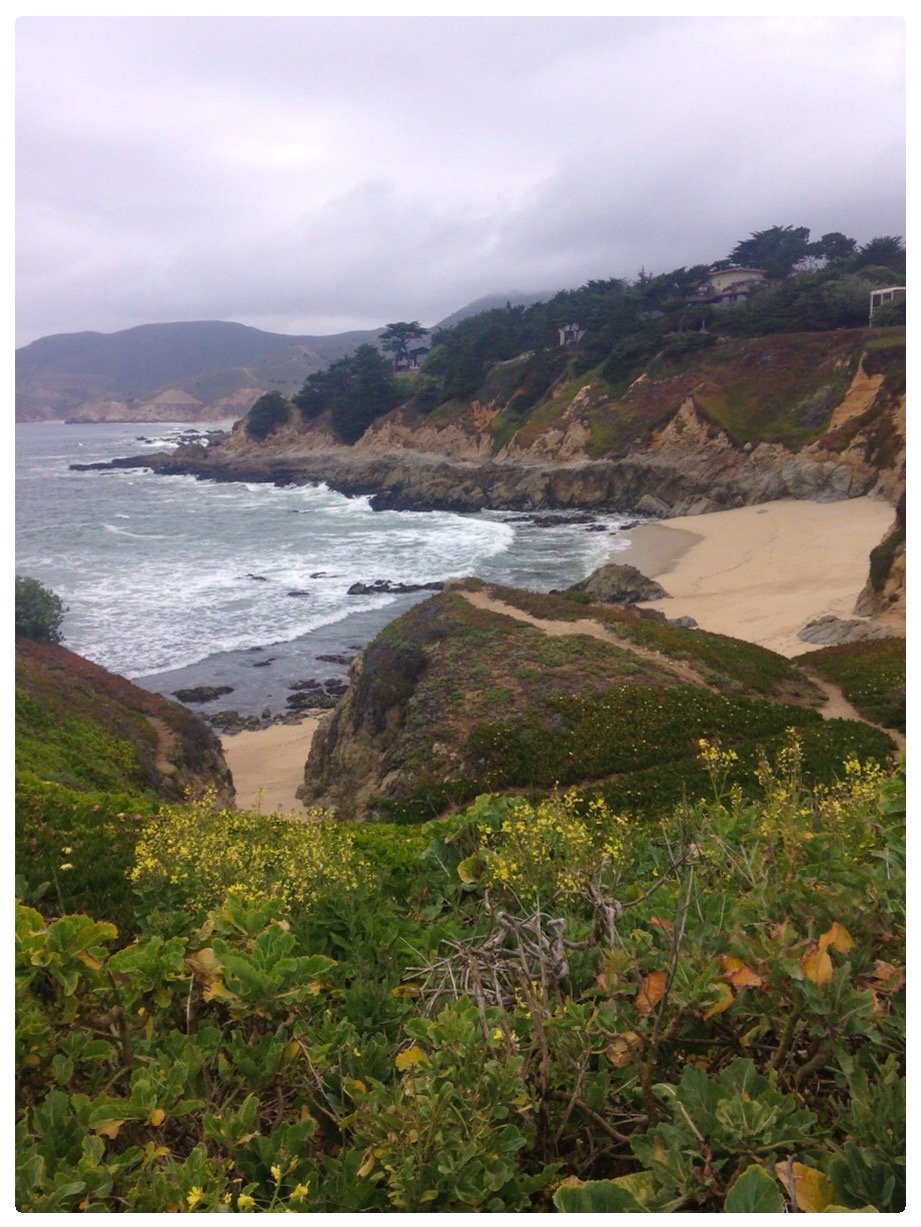 The view of the beach situated just below the hostel 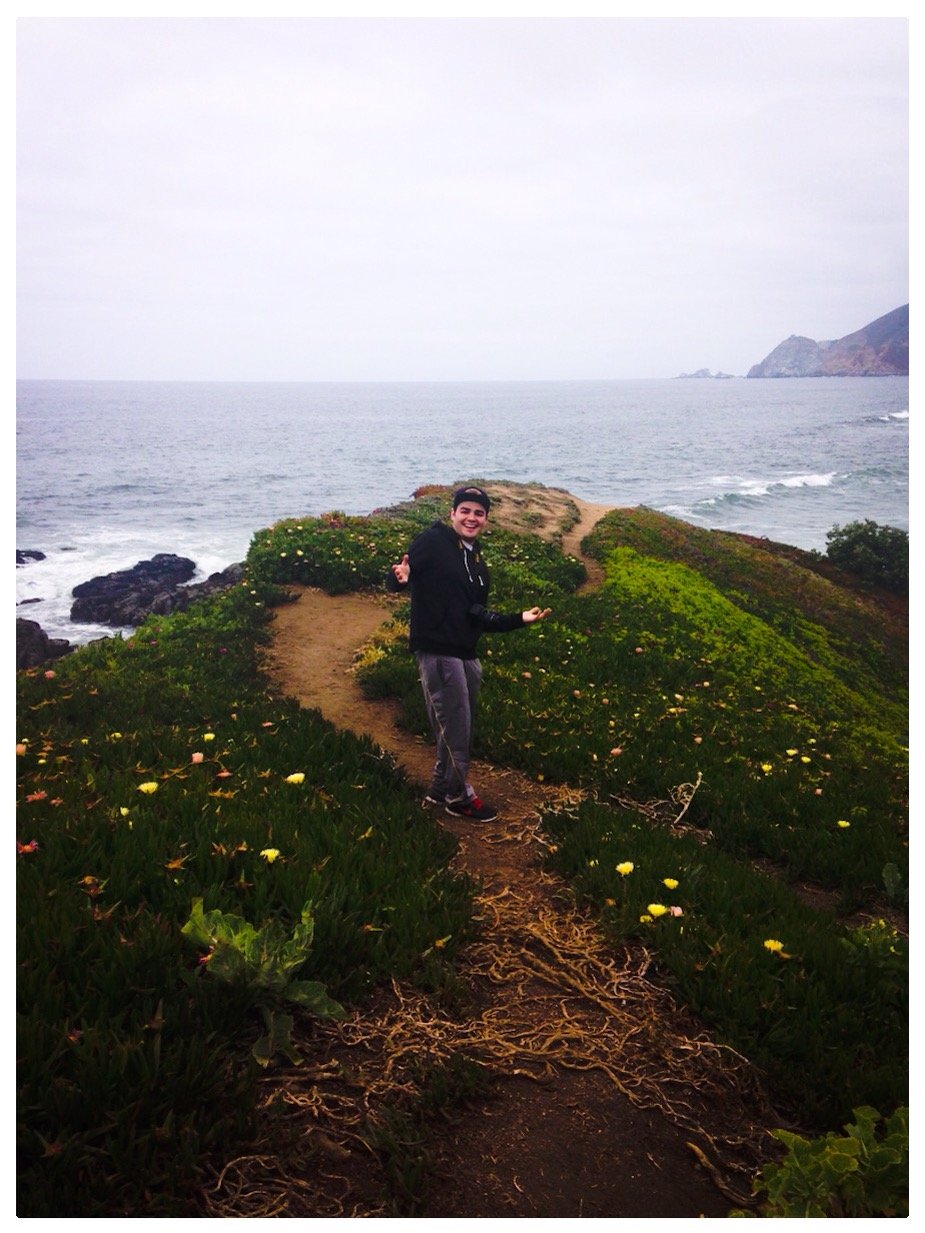 KB hiking the path behind the hostel!

As we left the lighthouse, KB was excited to route us to our next stop: Año Nuevo State Park. He said there was a bit of hiking involved which didn’t exactly get me excited (prepare for a quad workout), but promised the end would be well worth it. Yeah. Okay. I can admit when I’m wrong. We walked along a boardwalk trail and hiked up hills of sand, finding ourselves at a vantage point looking down on a beach full of hundreds of molting elephant seals! Año Nuevo is a total state park gem, allowing its visitors unparalleled views of seals in their natural habitat. Guides along the trail gave us information on the female seals that were sunbathing during our time at the park, but also let us know we can come back at different times throughout the year and there’s always more to see (the males come up onto land and fight for prime beach real estate in prep for mating season). We sat for almost an hour just listening to the seals bark at each other and watching them wrestle in the sand. I am still floored that such an unforgettable experience can be found only an hour away from home. 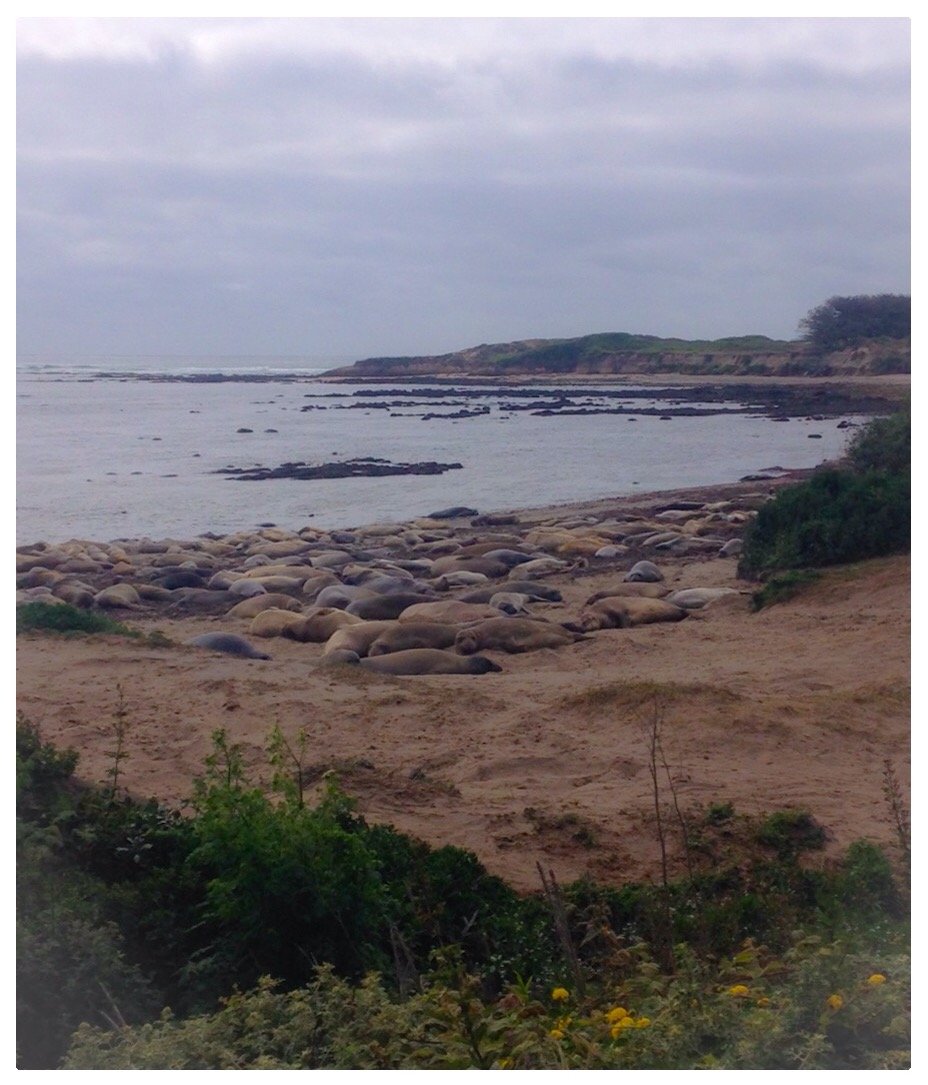 We had decided to stay outside of Big Sur because we found the most amazing bed and breakfast in Aptos: Sand Rock Farm. We booked two nights in the Honeycomb Queen Suite and were floored when we were greeted at the door by the owner, Jen, and were given mouth watering dinner recommendations (Aptos BBQ, drool).

Sand Rock Farm has a talented chef on staff so we woke up to to the smell of coffee, two large fruit parfaits to start, topped off with eggs over rosemary potatoes and some sort of jam that I’m pretty sure was beamed down from Heaven. I still dream about that breakfast…

From Aptos we headed back out along the coast and made our first stop of the day at Point Lobos State Reserve. Point Lobos boasts an easy but scenic stroll along a cliff side trail that allows for some views of the bluffs. The trail itself only took us about a half hour with plenty of time for photography stops. We snapped up all of our photos and hit the road towards the entrance of Big Sur. 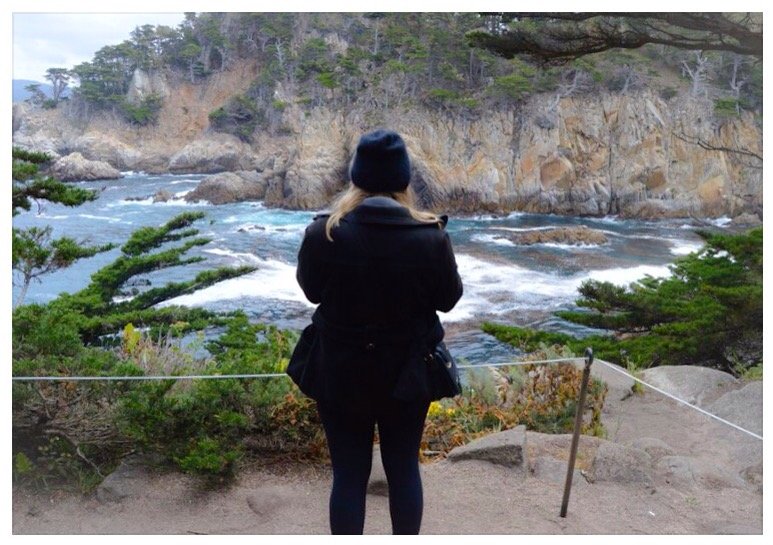 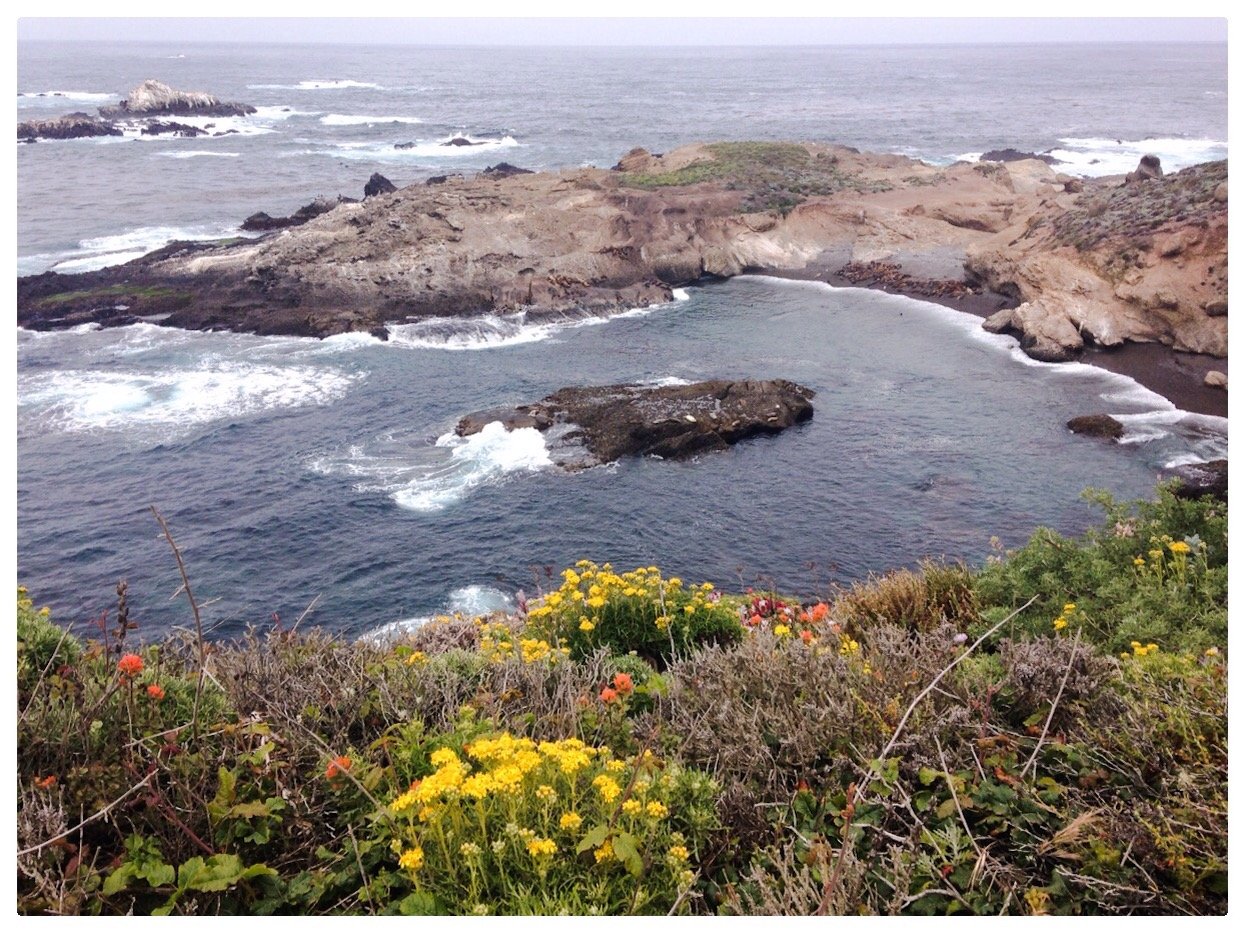 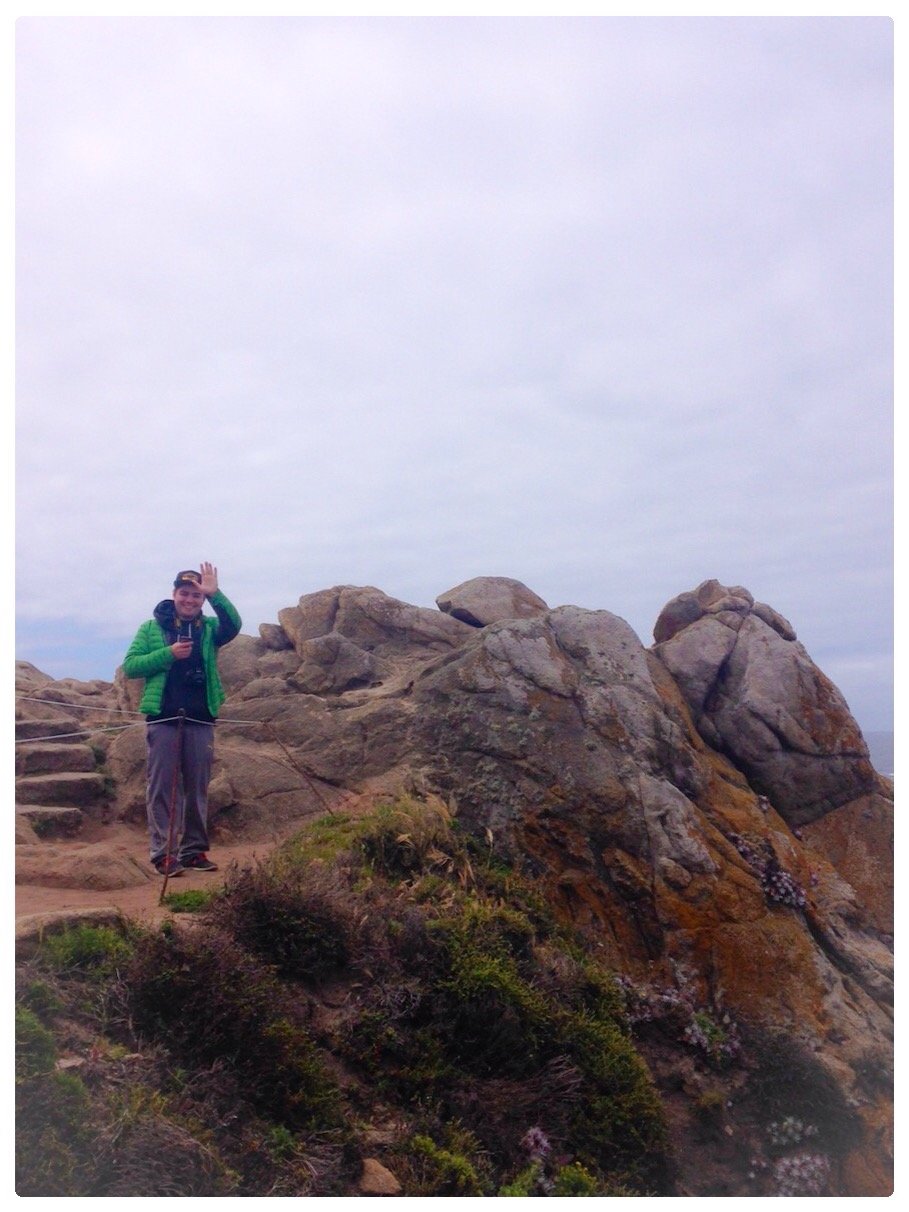 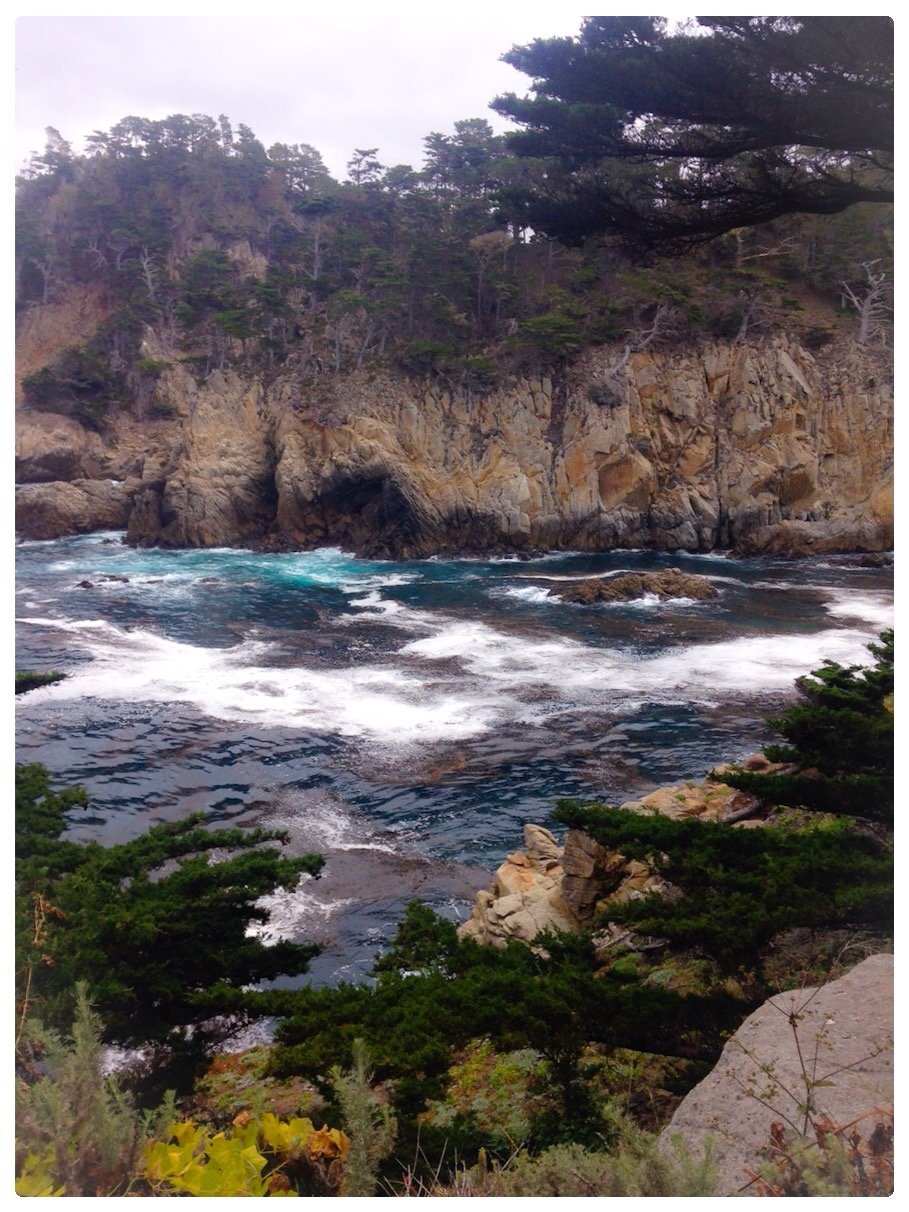 We followed Route 1 south and pulled over to snap photos at Bixby Bridge. Bixby Bridge is considered the entrance to Big Sur by many, primarily because Big Sur was relatively cut off from society during the winter seasons until the bridge opened in 1932. As you stand teetering on the edge of a hillside overlooking the Pacific, it’s really easy to understand why Bixby is one of the most photographed bridges in the world. 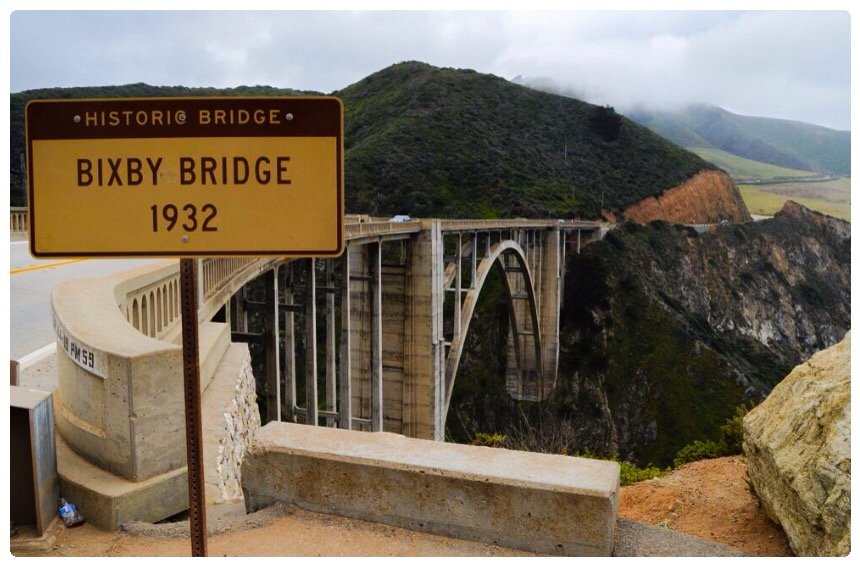 Easily the most beautiful stop of our entire trip was Mcway Falls nestled inside of Julia Pfeiffer Burns State Park. Visitors aren’t allowed to get up close and personal to the waterfall itself (short of boating in, it’s not even reachable), but you can catch a stunning view of the 80 ft tall beauty from the trail above. We couldn’t believe California was home to ocean water that looked so blue (San Francisco Bay isn’t exactly known for Bora Bora style ocean water). It’s crazy to think there was once a mansion perched up on the hill we had hiked…people actually lived here?? 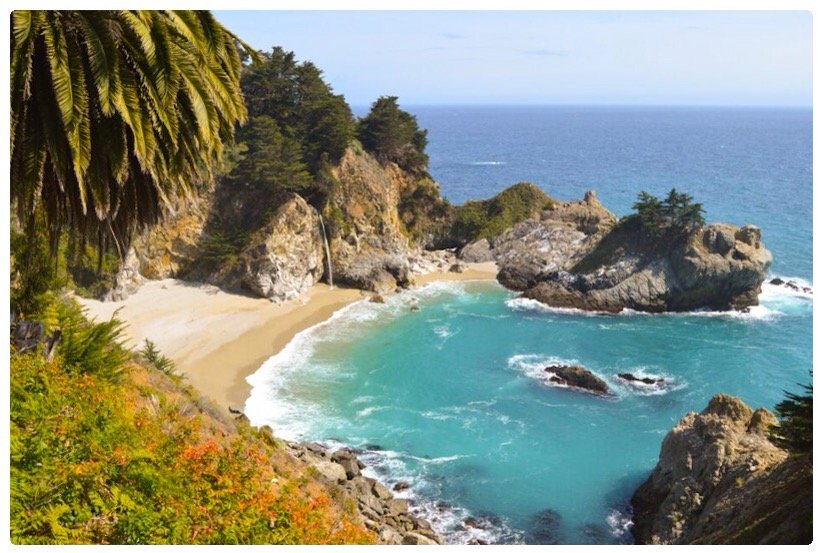 An unobstructed view of McWay Falls

Because what’s a vacation without a cheesy, romantic, touristy photo?

We downed some burgers, fries, and beers during a long and lazy lunch at Nepenthe, eventually making our way back up north. We decided to stop in Carmel on our way back home and laid out a blanket on the beach, soaking in what was left of the sun for the day. I don’t even recall where we went for dinner that night because I’m pretty sure we were still nursing BBQ, Sand Rock Farm, and Nepenthe food babies. 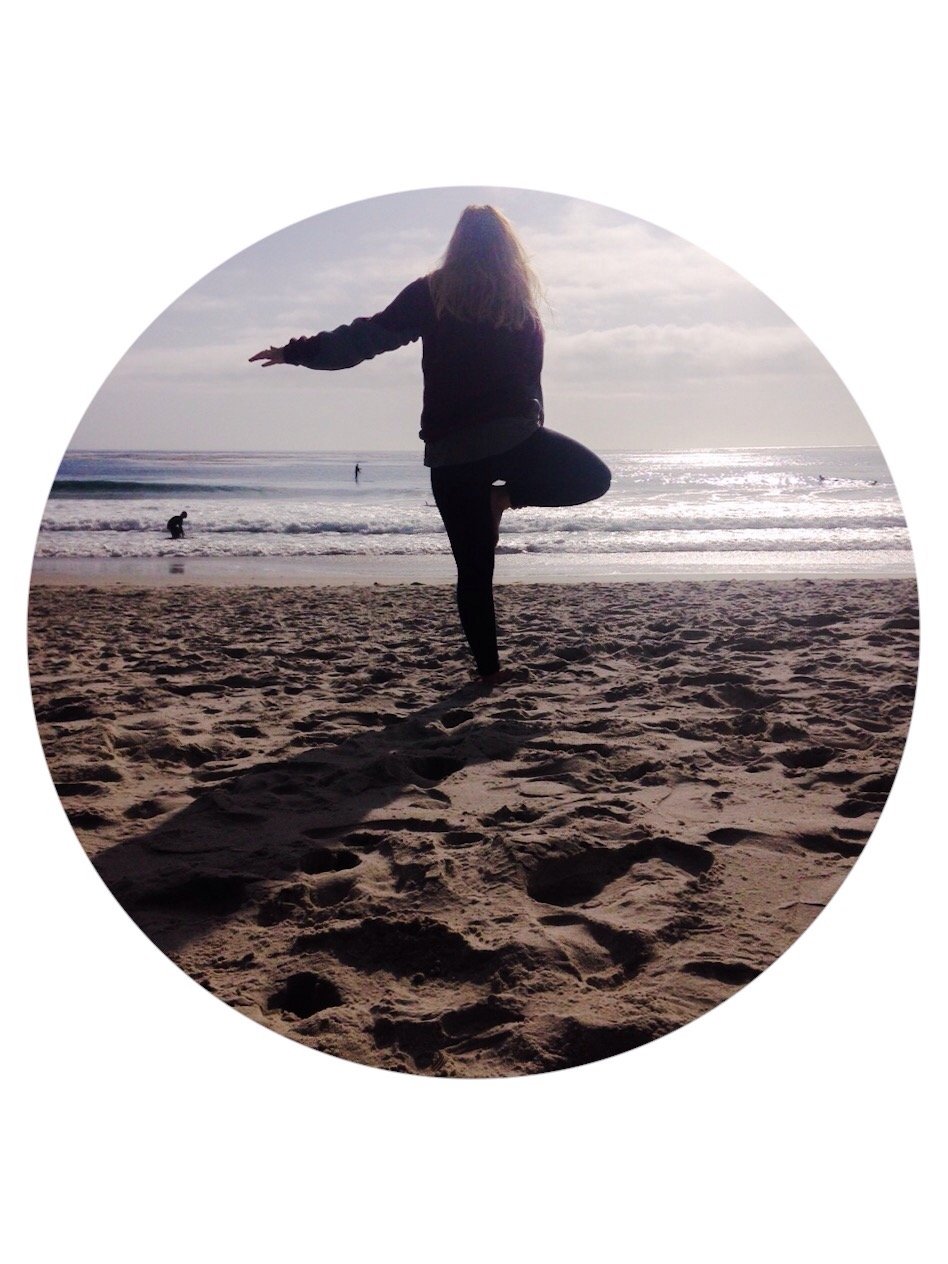 I have these really vivid memories from my childhood of a trip to a beach town with my family and KB and I were able to recreate that on Sunday! I called my mom for verification – the memorable family vacation had been to the seaside town of Capitola. We grabbed some early morning salt water taffy (don’t judge our sweet teeth) as we wandered the boardwalk to catch views of surfers and the notable (colorful) Venetian Hotel. The best part of Capitola was shopping at Panache, a Monterey based beauty store with walls of colorful bottles of lotion. As a kid I remember owning a sparkly lemon scented lotion and though sparkles aren’t super practical in my adult life I totally picked up a bottle (…and maybe 5 more). 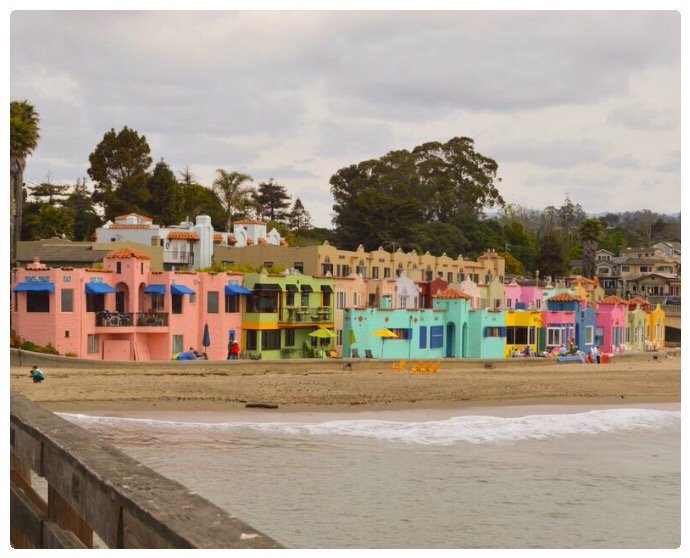 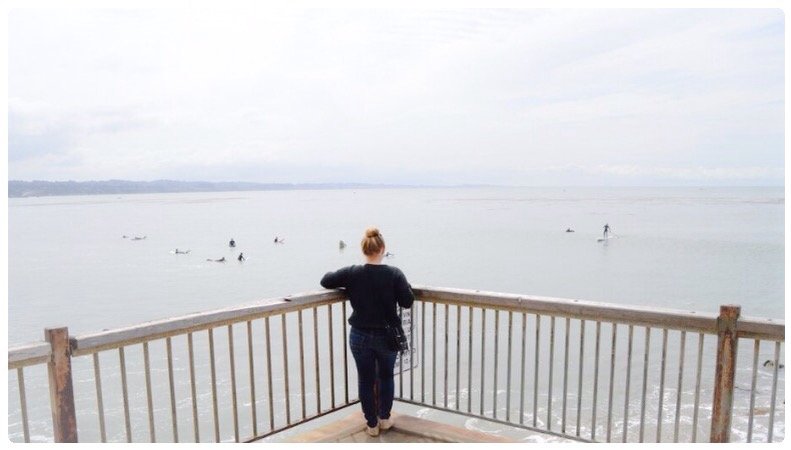 We kept the childhood nostalgic trip going with a stop at the Santa Cruz Beach Boardwalk. KB wasted a ton of money trying to win me a stuffed animal – the boardwalk is fun but I swear all the games are rigged. We shoveled funnel cake into our mouths and played arcade games until we came to terms with the reality that they just aren’t winnable. Oh, and beware of seagulls. 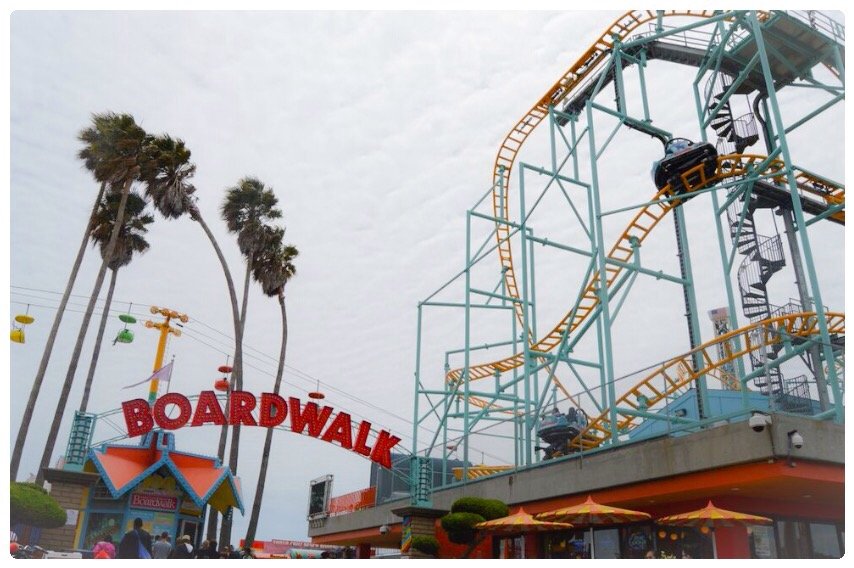 Our trip along the coast was easily my favorite trip of the year (so far). Big Sur and the California coast are jaw-droppingly gorgeous and, lucky for me, just down the freeway.