5 Psychology Concepts From Pixar’s “Inside Out”

For those of you who haven’t yet seen Pixar’s new box office hit “Inside Out”…GO. IMMEDIATELY. We are talking “Up” level genius here, people. On that note:

“Inside Out” is the story of Riley, a young girl we follow from birth through her adolescence as she and her family move from a small town in Minnesota to the city of San Francisco. The audience experiences Riley’s life through the lens of her emotions – yes, her actual motley crew of emotions. We get to watch Joy, Sadness, Fear, Anger, and Disgust all run around in Riley’s head helping her work through her every day situations by manning a control panel inside her brain. Though “Inside Out” is an adorable Pixar film in every sense, many of the psychological happenings in the film ring true. Check out some of the awesome psychological truths below that “Inside Out” adapts for the big screen! 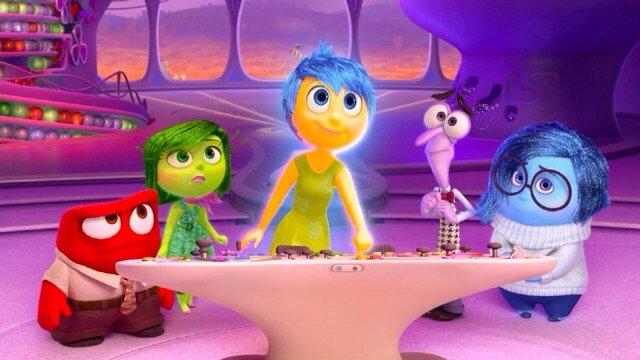 Throughout the film we get to see new memories come into the “control center” all day long in the shape of bright colorful orbs. At the end of each day a single emotion (Joy takes the first shift) is put on “long term memory” and “dream duty” where a lever is pulled and all the short term memories gathered throughout the day are sent down to long term. Audience eyeballs are glued to the screen as we watch these colorful memories spin down winding tracks all the way to “long term” where they are carefully filed away on shelves of skyscraper worthy heights. 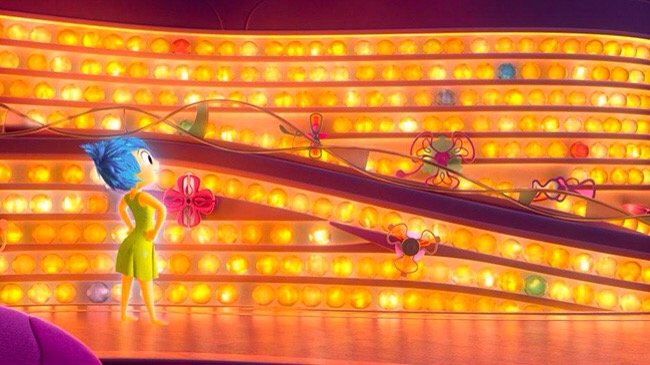 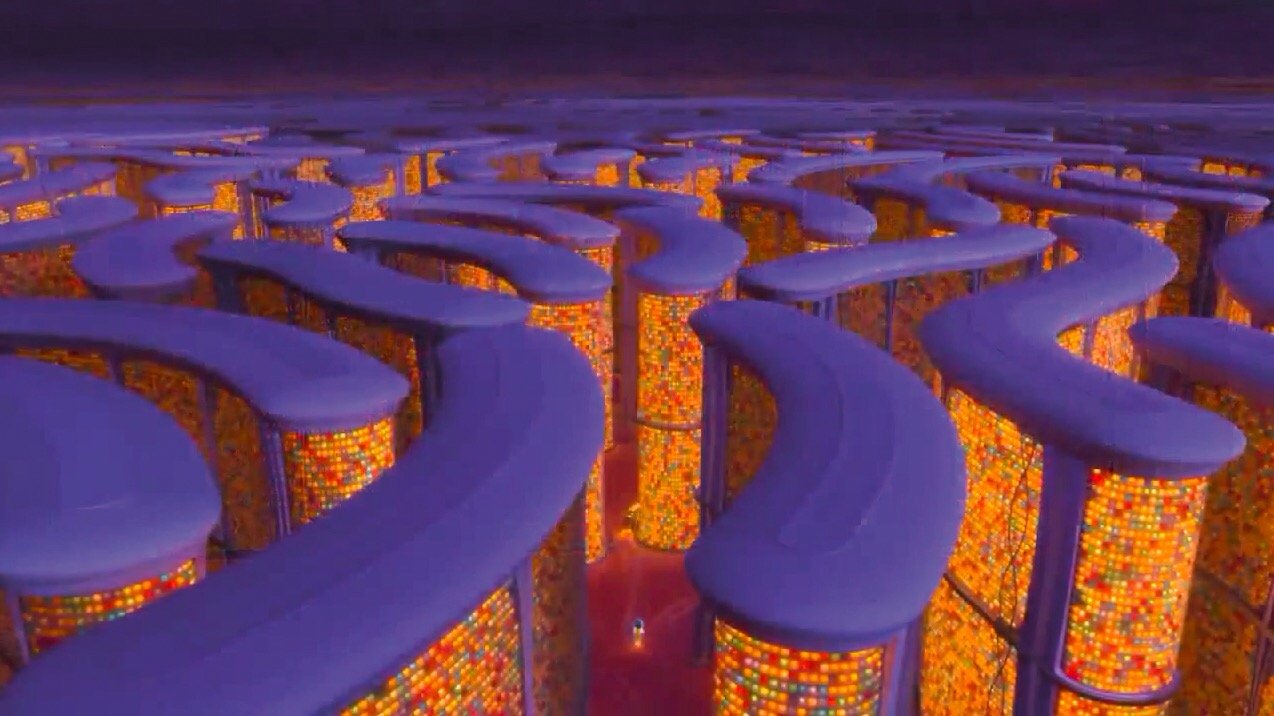 The “shelves” housing all of Riley’s long term memories

Our memories may not actually be bright orbs and they certainly don’t spin on actual tracks, but Pixar’s interpretation is an incredibly clear depiction of the concept of memory conversion while we sleep. Our hippocampus, the memory center of the brain, acts to create and consolidate our memories. Without good rest the hippocampus struggles with memory consolidation, making sleep crucial in cementing what we’ve experienced throughout the day and allowing us to recall that information later!

2. We culturally tend to value certain traits & emotions over others – but all are meaningful. 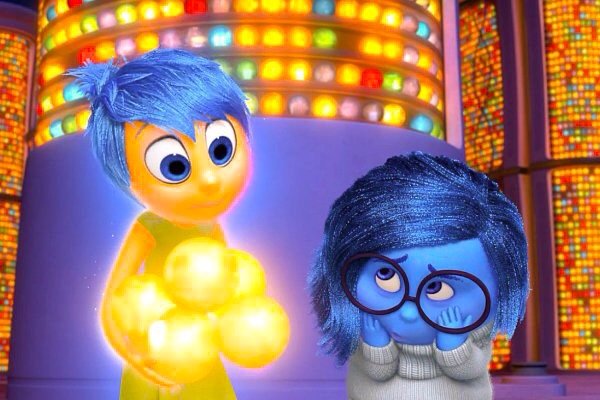 The entire plot of “Inside Out” orbits around the juxtaposition of Joy and Sadness, with Joy constantly trying to suppress Sadness. At one point in the film Joy even orders Sadness to stay within a hand drawn circle on the floor of the control room (“don’t touch ANYTHING!”).   In Western culture we spend a great deal of time and energy in the pursuit of happiness and often encourage those around us to be happy rather than to “wallow” in sadness. Our intentions may be good, but “Inside Out” actually emphasizes the importance of Sadness. Only by remembering the sadness she felt when she lost a hockey game can Riley also reminisce on the love and support she received from her family and friends afterwards. Riley didn’t need to be forced or told to be happy – she actually just needed to be allowed to be sad. Though she originally is asked to stay confined and holed up, by the end of the film Joy is actually passing Sadness memories to hold and change. We then learn that only with the acceptance of Sadness can we truly process our emotions and grow.

3. On that note – emotions aren’t always singular but can often be combined.

“Inside Out” uses nostalgia as a clear example of how emotions can often be combined rather than singular – again think back to Riley reminiscing on the sadness of her loss but the love she felt from her family. 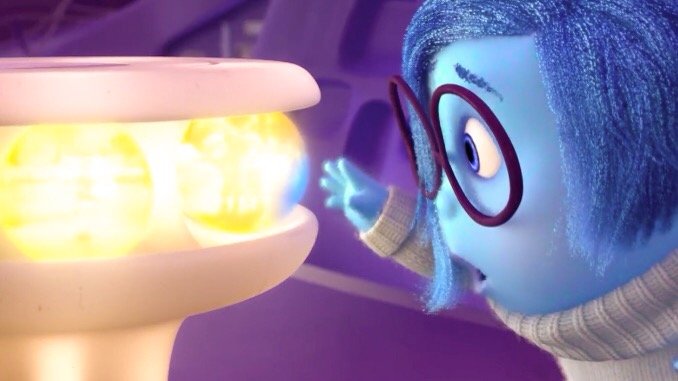 Sadness touches a happy memory of Riley’s, turning it blue

This mixture of emotion is very real – think of every day examples like “bitter sweet” or the “I hate you, but I love you” perimeters surrounding just about every angst filled pre-teen relationship. Emotions tend to be grey rather than black and white, allowing us for example to be happy that school is ending for summer vacation but also giving us a twinge of sadness that it’s over and we won’t see our friends for months. At the end of “Inside Out” we see the once mono-colored memory orbs roll into Riley’s control center with mixtures of colors – Sadness & Joy, Anger & Disgust, and so on!

4. As we age, our emotions become more complex and expansive.

“Inside Out” gives us a view into the simplicity of emotions when we are young and how they become more complex as we age! Riley’s control panel starts off very basic, there are only five emotions and only one of them can be at the controls at any point in time. We also see at various times in the movie that adults have a larger control panel than Riley (humorously depicted by her mother’s emotions lined up at their controls, influencing how she quibbles with her husband at the dinner table). 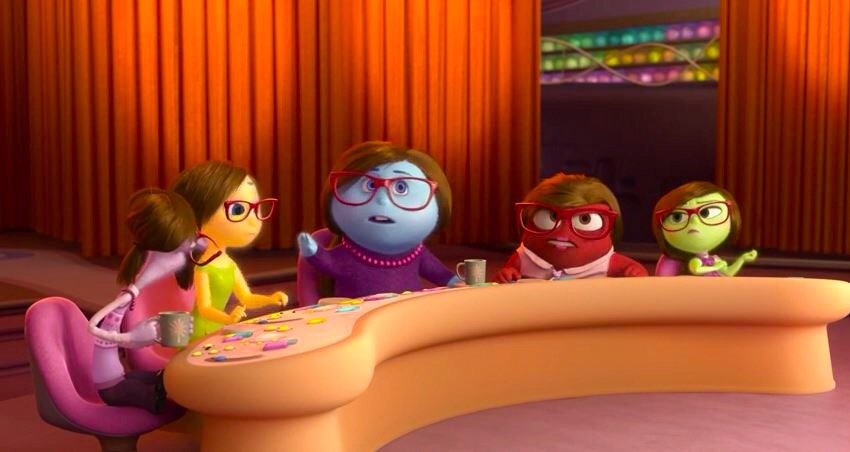 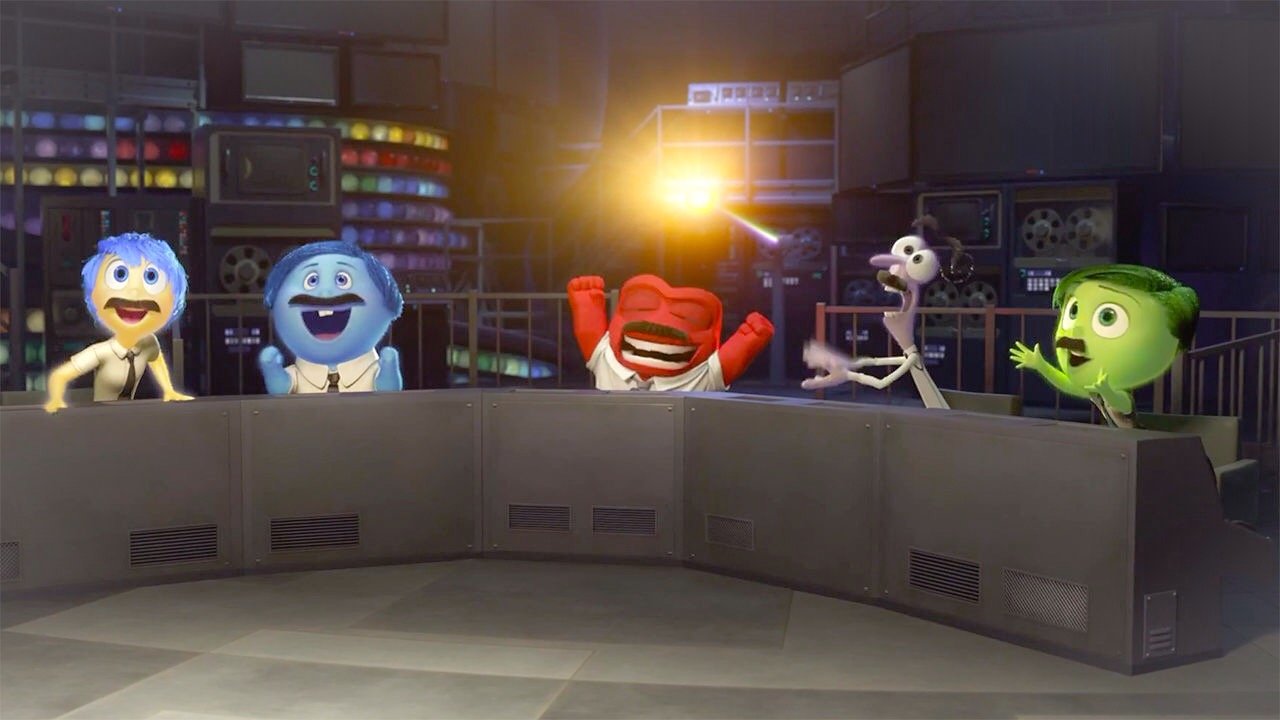 Again done in an artistic fashion, but the concept rings true! These expanded control panels allow us to see how, as we age, our emotions become more complex and multi-faceted. As the five basic emotions man the controls at the same time, Riley (and the rest of us) is then opened up to new sophisticated emotions like embarrassment, pride, or guilt.

5. Emotions guide our perception of the world

Western culture likes to believe that logic and reason should drive life – but really emotions are behind the wheel. Think of Riley’s move to San Francisco where all appears to be dark, gloomy, and depressing – she was looking at this new adventure through the lens of Fear and Sadness. Once she finds her bearings however, that lens shifts! Emotions influence our perception of the world, how we remember our memories, and even how we make our every day decisions.

Catch Pixar’s “Inside Out” in theaters now and be ready for some laughs, tears, and all the emotions in between!

All original photos property of Pixar.

How to Lose Weight While on Vacation

For the Man Who Has Everything

One response to “5 Psychology Concepts From Pixar’s “Inside Out””